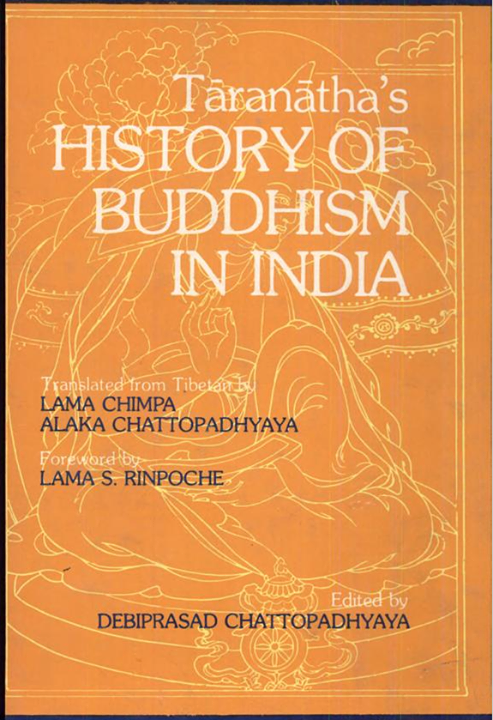 Born in A.D. 1575, Lama Taranatha wrote this book in 1608. V. Vasilev of St. Petersburg translated it from Tibetan into Russian in April 1869 followed by the German translation of the text by Schiefner also published from St. Peterburg in October of the same Year. In view of the profound importance of the work for understanding Indian history in general and of the history of Buddhism in particular. modern scholars have extensively using specially Schiefner`s German translation of the History for decades and this for varied purposes.

Relevance of this book can be seen in D.N.Jha's rebuttal of Arun Shourie's essay on the marxist interpretation of the destruction of the Nalanda University:

..."Look at another passage (abridged by me in the following paragraph) from the History of Buddhism in India written by another Tibetan monk and scholar Taranatha in the 17th century:

During the consecration of the temple built by Kakutsiddha at Nalendra [Nalanda] “the young naughty sramanas threw slops at the two tirthika beggars andkept them pressed inside door panels and set ferocious dogs on them”. Angered by this, one of them went on arranging for their livelihood and the other sat in a deep pit and “engaged himself in surya sadhana” [solar worship] , first for nine years and then for three more years and having thus “acquired mantrasiddhi” he “performed a sacrifice and scattered the charmed ashes all around” which “immediately resulted in a miraculously produced fire”, consuming all the eighty four temples and the scriptures some of which, however, were saved by water flowing from an upper floor of the nine storey Ratnodadhi temple. (History of Buddhism in India, English tr. Lama Chimpa & Alka Chattopadhyaya, summary of pp.141-42).

If we look at the two narratives closely, they are similar. The role of the Tirthikas and their miraculous fire causing a conflagration are common to both. Admittedly one does not have to take the miracles literally but it is not justified to ignore their importance as part of traditions which gain in strength over time and become part of collective memory of the community. Nor is it desirable or defensible to disregard the element of long standing antagonism between the Brahmins and Buddhists which may have given rise to the Tibetan tradition and nurtured it till as late as the 18th century or even later. It is in the context of this Buddhist-Tirthika animosity that the account of Sumpa assumes importance; it also makes sense because it jibes with Taranatha’s evidence. Further, neither Sumpa, nor Taranatha, ever came to India. This should mean that the idea of Brahminical hostility to the religion of the Buddha traveled to Tibet fairly early and became part of its Buddhist tradition, and found expression in the 17th-18th century Tibetan writings."

T?ran?tha (1575–1634) was a Lama of the Jonang school of Tibetan Buddhism. He is widely considered its most remarkable scholar and exponent. Taranatha was born in Tibet, supposedly on the birthday of Padmasambhava. His original name was Kun-dga'-snying-po, the Sanskrit equivalent of which is Anandagarbha. However, he adopted Taranatha, the Sanskrit name by which he was generally known, as an indication of the value he placed on his Sanskrit scholarship in an era when mastery of the language had become much less common in Tibet than it had once been. He was also paying homage to his Indian teacher, Buddhaguptanatha.[1] His exceptional qualities are said to have been recognized by others at a young age, as is often the case with great masters. He studied under such masters as Je Draktopa, Yeshe Wangpo, Kunga Tashi and Jampa Lhundrup, although his primary teacher was Buddhaguptanatha. Taranatha was recognized by Khenchen Lungrik Gyatso as the rebirth of Krishnacarya and the Khenchen's own teacher, Jetsun Kunga Drolchok. Taranatha was a prolific writer and a renowned scholar. His best known work is the 143-folio History of Buddhism in India (dpal dus kyi 'khor lo'i chos bskor gyi byung khungs nyer mkho) of 1608,[3][4][5] which has been published in English. His other major work, The Golden Rosary, Origins of the Tantra of the Bodhisattva Tara of 1604 has also been translated into English. In 1614 Taranatha founded the important Jonangpa monastery Takten Dhamchöling, in the Tsangpo Valley about 200 miles west of Lhasa. After the take-over by the Gelug in 1642, it became known as Ganden Puntsokling. - Wiki

A difficult book which is very poorly edited. I personally knew the editor Debiprasad Chattopadhyaya but sadly he saw nothing beyond Jones' Palibothra. Unlike Prof. A. K. Narain he dismissed my criticism as harmless frolic.

Could you elaborate further? Who was Prof. Narain? I only know Chattopadhyaya as a historian of materialist philosophies in India.

The Late Prof. A. K. Narain was one of the famous Indologists who is world famous for his study on the Indo-Greeks. This Chattopadhyaya is another person.

Thank you for sharing this. I have been wanting to read this book.