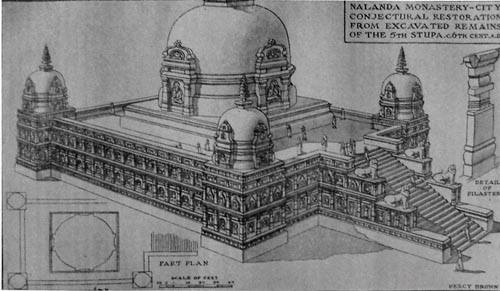 Article:
Nalanda and the pursuit of science
By Amartya Sen
The Hindu - 24 January 2011

‘Nalanda stood for the passion of propagating knowledge, understanding.' Amartya Sen's keynote address at the 98th Indian Science Congress in Chennai on January 4.

The subject of this talk is Nalanda and the pursuit of science, but before I go into that rather complex issue, I must say something about Nalanda itself, since it is still an obscure entity for most people in the world. Since the university is being, right now, re-established under a joint Asian initiative, the fact that Nalanda was a very ancient university is becoming better known. But how does it compare with other old universities in the world?

Well, what is the oldest university in the world? In answering this question, one's mind turns to Bologna, initiated in 1088, to Paris in 1091, and to other old citadels of learning, including of course Oxford University which was established in 1167, and Cambridge in 1209. Where does Nalanda fit into this picture? “Nowhere” is the short answer if we are looking for a university in continuous existence.

Nalanda was violently destroyed in an Afghan attack, led by the ruthless conqueror, Bakhtiyar Khilji, in 1193, shortly after the beginning of Oxford University and shortly before the initiation of Cambridge. Nalanda university, an internationally renowned centre of higher education in India, which was established in the early fifth century, was ending its continuous existence of more than seven hundred years as Oxford and Cambridge were being founded, and even compared with the oldest European university, Bologna, Nalanda was more than six hundred years old, when Bologna was born. Had it not been destroyed and had it managed to survive to our time, Nalanda would be, by a long margin, the oldest university in the world. Another distinguished university, which did not stay in existence continuously either, viz. Al-Azhar University in Cairo, with which Nalanda is often compared, was established at a time, 970 AD, when Nalanda was already more than five hundred years old.

Amartya Sen blindly follows the British school of Buddhist history (Fuehrer, Gombrich et. al) which is very shallow. While elaborating on Nalanda and the pursuit of science one cannot overlook Chandidas' famous saying about the supremacy of the human being over all doctrines (Sabaar cheye maanus satya taahaar upare naai) which, in my view, springs from the Nalanda tradition.

I fondly remember discussions on this issue with Prof. A. K. Narain who agreed with me about the great importance of Chandidas' saying but asked me to give the precise source. I tried very hard but could not locate it.

Amartya Sen's achievement as the head of Nalanda University is nil but I do not think the new Singapore man can lift the institution from the quagmire of red tape and second rate British scholarship.

It is important to note that king Devapala(AD 810-851) invited the Afghan scholar Viradeva from Lamghan to serve as the Acharya of Nalanda Mahavihara.

Gautama Buddha is said to have visited Nalanda but archaeology of Nalanda in modern Bihar cannot be fitted to this. This, however, does not bother Amartya Sen and his British party.

What I like about this reconstruction is the artist obviously hasn't been to the site!