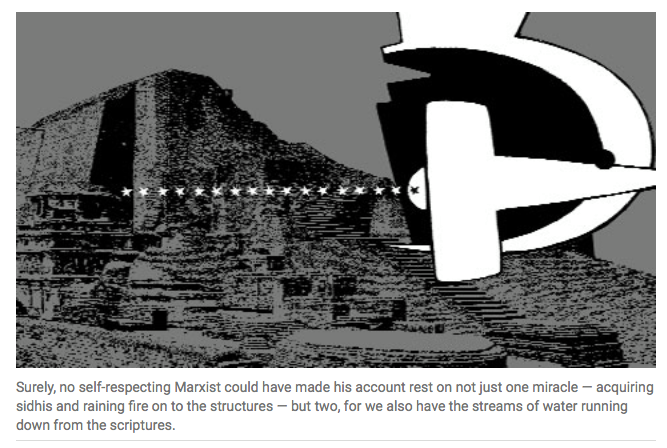 Essay:
How history was made up at Nalanda
The story behind a Marxist historian’s story of its destruction by ‘Hindu fanatics’.
By Arun Shourie
Indian Express - 28 June 2014

“The mine of learning, honoured Nalanda” — that is how the 16th-17th century Tibetan historian, Taranath, referred to the university at Nalanda. At the time I-tsing was at the university, there were 3,700 monks. The total complex had around 10,000 residents. The structures housing the university were as splendid and as extensive as the learning they housed. When excavations began, the principal mound alone was about 1,400 feet by 400 feet. Hieun Tsang recounts at least seven monasteries and eight halls. The monasteries were of several storeys, and there was a library complex of three buildings, one of them nine storeys high.

As the Islamic invaders advanced through Afghanistan and northwestern India, they exterminated Buddhist clergy, they pillaged and pulverised every Buddhist structure — the very word “but”, the idols they so feverishly destroyed, was derived from “Buddha”. Nalanda escaped their attention for a while — in part because it was not on the main routes. But soon enough, the marauders arrived, and struck the fatal blow. The ransacking is described in the contemporary Tabakat-i-Nasiri by Maulana Minhaj-ud-din.

Minhaj-ud-din rose and came to the notice of the rulers of the time — Qutb-ud-din Aibak and others — because of his raids and depredations, and because of the enormous booty he gathered, booty sufficient for him to set himself up as a plunderer in his own right. “His reputation reached Sultan (Malik) Qutb-ud-din, who despatched a robe of distinction to him, and showed him honour,” the historian writes. With its high wall, its large buildings, Nalanda seemed like a well-endowed fortress to Ikhtiyar-ud-din and his force. He advanced upon it with two hundred horsemen “and suddenly attacked the place”. Minhaj-ud-din continues, “The greater number of inhabitants of that place were Brahmans, and the whole of those Brahmans had their heads shaven, and they were all slain.

There were a great number of books there; and when all these books came under the observation of the Musalmans, they summoned a number of Hindus that they might give them information respecting the import of those books; but the whole of the Hindus had been killed. On being acquainted (with the contents of the books), it was found that the whole of that fortress and city was a college, and in the Hindu tongue, they call a college, Bihar [vihara].”

And Shourie is now some sort of historian?!?

Did they mean Muslim fanatics? All these names are Muslim names. Sorry, am I missing something?

The Nalanda debate - Grist to the reactionary mill The above account mentions the fortress of Bihar as the target of Bakhtiyar’s attack. By D.N.Jha Indian Express - 9 July 2014 Read more: http://bit.ly/1fwE2R4

Read the article in the link. It tells the whole story. Ed, he is not a historian but a journalist and author. I believe he has every right to verify the sources and comment on inclusions and omissions, and that is just what he did. An extra addition of more contemporary sources has been made for good measure and to prove a point.

No surprises here. Self hatred and despise for one's past and religious faith combined with adoration of 'not self or exotic' is part of marxist liberal psyche and runs through all of its scholarship. In the public sphere this false collective psyche gives us modern seculariam.

In 1193, the Nalanda University was sacked by[12] the fanatic Bakhtiyar Khilji, a Turk;[13] this event is seen by scholars as a late milestone in the decline of Buddhism in India. The Persian historian Minhaj-i-Siraj, in his chronicle the Tabaqat-I-Nasiri, reported that thousands of monks were burned alive and thousands beheaded as Khilji tried his best to uproot Buddhism and plant Islam by the sword[14] the burning of the library continued for several months and "smoke from the burning manuscripts hung for days like a dark pall over the low hills."[15] 11 ^ Sukumar Dutt (1962). Buddhist Monks And Monasteries of India: Their History And Contribution To Indian Culture. George Allen and Unwin Ltd, London. pp. 352–353. ISBN 81-208-0498-8. 12 "The Buddha and the Sahibs" by William Dalrymple 13 Scott, David (May 1995). "Buddhism and Islam: Past to Present Encounters and Interfaith Lessons". Numen 42 (2): 141. doi:10.1163/1568527952598657. 14 Gertrude Emerson Sen (1964). The Story of Early Indian Civilization. Orient Longmans.

I guess he reads books.

12. "The Buddha and the Sahibs" is authored by Charles Allen. Are you referring to this book or is there a review of it by William Dalrymple?!?! Just curious to know....

Good that we are at long last questioning the 'theories' of the left-liberal-secular-socialist intellectual thugs who cosied up to the Nehruvian dynasty and 'wrote' history.

Was Nalanda really a university or just a big Buddhist monastery? http://indianexpress.com/article/lifestyle/books/learning-to-unlearn/

you have lost the boat.A well read muslim {because the previous ones are uneducated} was the need of the day for BJP.your knowledge of history is too late.

Ad hominem is not a good way to deal with questions. ;-)