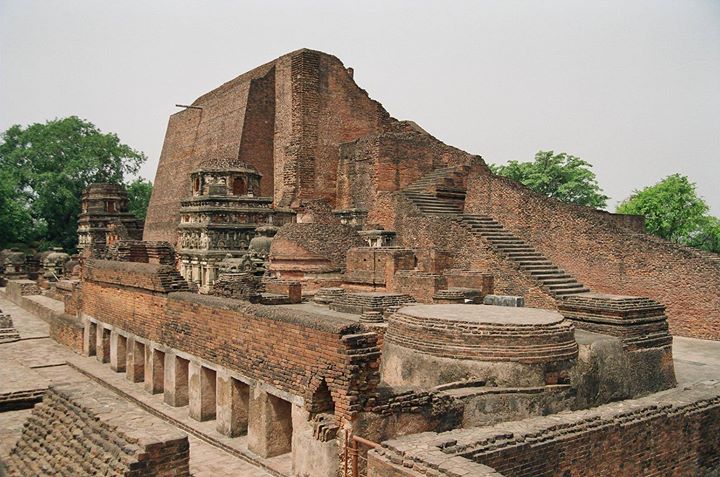 Listen to this interview:

"Foreign students came to the establishment to put an end to their doubts and then become celebrated." So said Xuanzang about Nalanda University in his memoirs of India. It was a matter of pride to be an alumni of Nalanda, he said. In a very evocative description of the campus, he said its buildings were majestic in size and height with richly adorned towers, fairy-like turrets appearing like pointed hill-tops and observatories lost in the mist of the morning. The upper rooms towered above the clouds and from the windows, one could see the wind and clouds producing ever new forms, and from the soaring eaves the sunset splendours and moonlit glories."

Listen to Sahana Singh from Indian History Awareness and Research speaking about the ancient universities of India. She points out that Nalanda was just one; there were a plethora of institutes of higher learning spread out all over India before the Muslim invasions.

Thanks for sharing! I'd like to highlight that debating was an intrinsic part of education in ancient India. Great stress was laid on the ability to expound on texts in public meetings. According to Xuanzang the monks frequently assembled for discussions to test intellectual capacity. Those who were able to put forward finer points in philosophy, and who were ornate in diction, were rewarded. Those with weak arguments were called out. Ancient Indian universities played a big role in nourishing the spirit of open debate in ancient India. Yijing, a Chinese traveller to India who came after Xuanzang mentions that kings were fond of organizing intellectual tournaments in which people with superior knowledge and debating skills were richly rewarded.

Amazing facts. Thanks for sharing.

I think the only thing lacking in Indian scholarship was using physical evidence & empirical studies in arguments like we do nowadays.

The description of Nalanda campus by Xuanzang makes everything come alive. It must have been a grand place of learning. To think that the first university in Europe, the University of Bologna came up only around the time when Nalanda was destroyed by Khilji!

I think you will have something to say about this Raj Vedam?

Dear Achintya Nath Sexena, you may want to Google for Hindu, Buddhist and Jain epistemology and appreciate the deep basis of knowledge in Indic traditions. Indian works in mathematics, technology, medicine, astronomy, philosophy, grammar could not have been refined to the high levels that they accomplished in the 10th-12th century CE (before near-total destruction by Muslims) without deep appreciation of knowledge gathering and handling. What you see today is a pizza-effect (lookup this phrase too) of Indian methods usurped, removed from its roots and sources, repackaged as Western and sold back to Indians as something new. To whet your interest, I give you one prime example: Bhaskara II of Bijapur, professor at Ujjain University in the 11th Century CE: Bhaskara-Munjala's estimate of Axial Precession is 25,461 years, whereas the modern estimate is 25,771 years. This would not have been possible without careful observations, calculations, corrections, extrapolations, and proofs. In future episodes, we will bring out more aspects of the growth and fall of Indian knowledge systems, and its revival today.