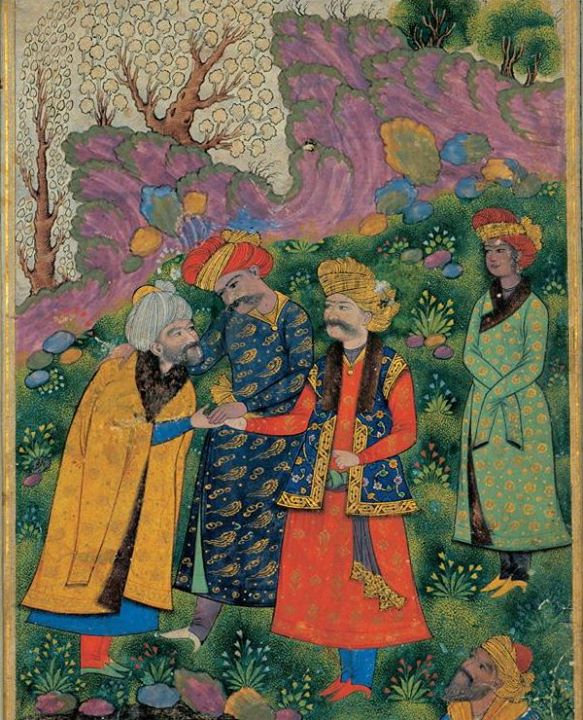 Mahmud of Ghazni (October 2, 971 – April 30, 1030 C.E.), also known as Yamin ad-Dawlah Mahmud (in full: Yamin ad-Dawlah Abd al-Qasim Mahmud Ibn Sebük Tigin), was the ruler of the Ghaznavid Empire from 997 C.E. until his death. Mahmud turned the former provincial city of Ghazni into the wealthy capital of an extensive empire which included modern-day Afghanistan, Pakistan, most of Iran and parts of northwest India. He was also the first ruler to carry the title Sultan. He is remembered as a hero of Islam by some, as a defiler of Hindu, Jain, and Buddhist shrines by others (this legacy may have contributed to the destruction of ancient Buddhist shrines by the taliban in Afghanistan in 2001, although other Muslims opposed this destruction).[1] In any case, in the long run, no believer will be proud of historical attacks or destruction of other people's religion and sacred places. By establishing Muslim rule over a substantial part of the Indian Sub-Continent, he permanently changed the nature of sub-continental politics, religion, and culture. Arguably, the partition of India into the Muslim majority and Hindu majority states of Pakistan and India in 1947, was a consequence of Mahmud of Ghazni's military success.

Image:
Mahmud and Ayaz
The Sultan is to the right, shaking the hand of the sheykh, with Ayaz standing behind him. The figure to his right is Shah Abbas I who reigned about 600 years later.
Source: Tehran Museum of Contemporary Art, Tehran

I wonder if 18th century painting is considered "contemporary" in Tehran?

What a brave soldier