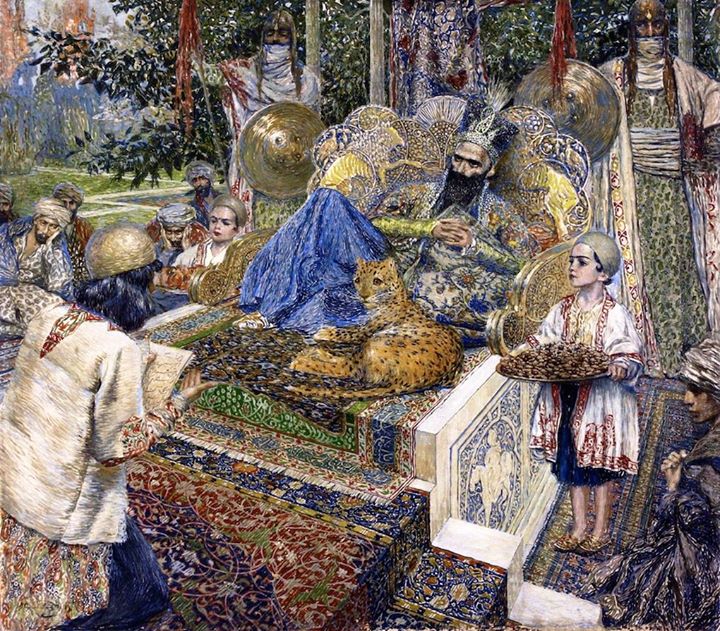 Digital Rare Book :
The Kitab-i-Yamini : Historical memoirs of the Amir Sabaktagín, and the Sultán Mahmúd of Ghazna, early conquerors of Hindustan, and founders of the Ghaznavide dynasty.
Translated from the Persian version of the contemporary Arab chronicle of Al Utbi by the Rev. James Reynolds
Sold by W.H.Allen & Co., London - 1858

The Tarikh Yamini, also known as the Kitabu-l Yamini, is an important early history of Muslim rule in India; it is a celebrated work and an major sources for later authors who wrote on the Ghaznivite period. Its author, Al-'Utbi, lived during the late tenth and early eleventh centuries. He was a member of the aristocratic 'Utba clan, members of which held important offices under the Samanis. He himself was Secretary to the Sultan Mahmud. He thus played an important role in the government at Ghazni, and no doubt had first hand knowledge of many of the events he described, at least those that took place in the capital. His work covers the entire reign of the first sultan of Ghazni Nasiru-d din Subuktigin, and of his son Mahmud up to the year 410 H. (1020 CE). As the founder of the Ghaznivite dynasty, Subuktigin played an extremely important role in the history of India and Central Asia. He initiated the pillaging and slave raids which were continued and expanded under his successor, Sultan Mahmud. The author evidently lived somewhat beyond this date, as he also refers to an event that occurred in 420 H. (1030 CE).

The work was composed in Arabic, and was translated into Persian several times, in which it bears the title Tarjuma-i Yamini. The oldest of these is that of Abu-l Sharaf Jabadkani, or Jabazkani, which was made in 582 H. (1186 CE). Manuscripts of this version are quite rare; it was translated into English by J. Reynolds, and published by the Oriental Translation Fund (London, 1858). There is also the modern Persian translation of Muhammad Karamat 'Ali of Delhi. It is a literal and correct translation, which is relatively more common. The Bibliotheque Nationale in Paris has three copies of the Arabic text and one of the Persian. Copies are not uncommon in India. Particularly useful is a lithographed edition in Delhi, dated 1847, which contains useful marginal notes explaining textual difficulties. This text has been edited by Maulavi Ashraf 'Ali and Dr. Sprenger.

The lengthy excerpts included here deal with the numerous raids of Amir Subuktigin of Ghazni (in modern Afghanistan) and his son and successor, Sultan Mahmud. Amir Subuktigin made his first of many raids into India in 376 H. (986-87 CE), and was assisted by his son Mahmud in many of them. Mahmud, after succeeding his father to throne of Ghaznî, in 997 CE, continued his father's policy and conducted many more raids until his death in 1030 CE. His numerous incursions into India were largely raids designed to capture spoil in material wealth, slaves and livestock. He is portrayed as a zealous Muslim eager to destroy "idol temples", but this was probably justification for pillage, since these activities contravened the earlier Arab policy of granting Hindus and Buddhists protected dhimmi status. These raids generally were not conquests resulting in annexation of territory, with the exception of the Punjab, most of which he did annex. Ghaznivite control even of the Punjab passed away with Mahmud. His incessant raiding over the course of almost thirty years, however, clearly destabilized Northern India and paved the way for the Muhammad Ghûrî's invasion of northern India in 1175 CE, which led to the establishment of the Delhi sultanate.

So grateful for the links to download these books. Remarkable service to history lovers!

Pages 34 to 43 describe the circumstances of the internecine war between Sabuktagin (Mahmud's father) and Jaypal, the king of the Punjab. That sets the stage for subsequent raids by Mehmud including the sacking of Somnath. TheEnglish translator interestingly mentions in his preface that there was no idol at Somnath. There was only a cylindrical stone there!