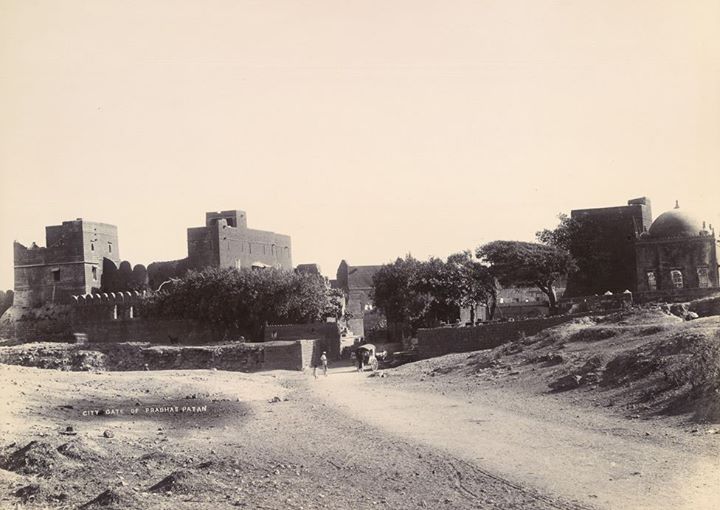 Photograph of the city gate at Somnath in Gujarat, taken by the travelling commercial photographer F. Nelson during the 1890s. The album is inscribed: “With best compliments from H.H. Rasulkhanji, Nawab of Junagadh (India)” and was formerly in the collection of Sir William Lee-Warner (1846-1912), who served in the Indian Civil Service and was a Member of the Council of India between 1902 and 1912.

Somnath is situated on the west coast of Saurashtra overlooking the Arabian Sea 6 km (four miles) east of Veraval. Also known as Prabhas Patan, it is a centre of Hindu pilgrimage. It is one of the twelve sites of Shiva’s Jyotirlinga or manifestation and the location of a great Shiva temple, the Somanatha Temple, which has legendary origins and dates from the 10th century. Beginning with Mahmud of Ghazni in 1024, the town was taken by successive Muslim invaders, each time the temple being plundered and demolished and later rebuilt.

Rebuilt every time after each barbaric destruction.