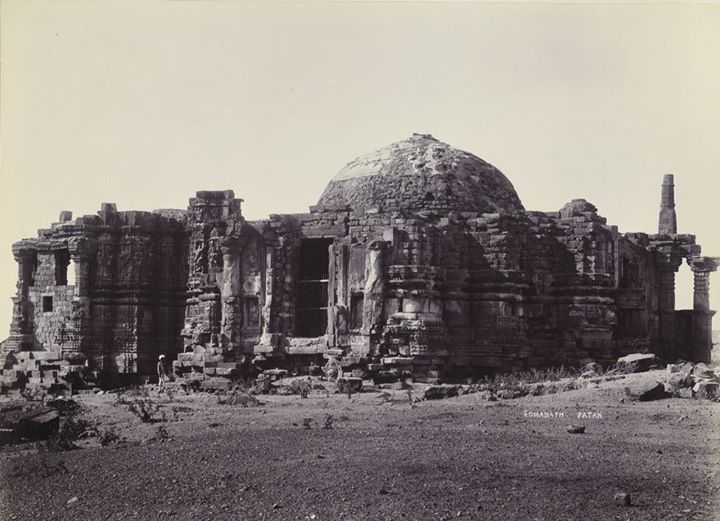 Photograph of the temple of Somanatha Temple at Somnath in Gujarat, taken by F. Nelson in the 1890s, from the Lee-Warner Collection: 'Photographs of Junagadh'. In the report, 'Somanatha and other mediaeval temples in Kathiawad' of 1931, Henry Cousens wrote, “Of all the shrines of Western India...there has been none so famous in the annals of Hinduism as the temple of Somanatha at Somanatha-Pattan, on the southern shore of Kathiawad, one of the twelve pre-eminent jotyir-lings which are scattered throughout India... In history it is chiefly noted for the great expedition that was led against it by Mahmud of Ghazni, in A.D. 1025. The old temple of Somnatha is situated is situated in the town, and stands upon the shore towards its eastern end, being separated by a heavily built retaining wall…Little now remains of the walls of the temple; they have been, in great measure, rebuilt and pached with rubble to convert the building into a mosque. The great dome, indeed the whole roof and the stumpy minars…are portions of the Muhammadans additions…The great temple, which faces the east, consisted, when entire, of a large central closed hall, or gudhamandapa, with three entrances, each protected with a deep lofty porch, and the shrine – the sanctum sanctorum – wich stood upon the west side of the hall, having a broad pradakshina or circumambulatory passage around it.”

Mahmud of Ghazni Act of shame !

He is in the form of hatred in other souls.

Perhaps he is an organic farmer in central california

MD.Ghazni is in every where in meny forms, ISIS, Al quaida, SIMI etc., don't forget what has happened recent years in Bamiyan, and many other ancient places in Iraq.

As a Hindu feeling shame

Last this temple was demolished and mosque was made on it by Aurangzeb.

what nonsense.Aurangzeb did nothing of this sort.It wa renovated by K.M.Munshi and Jam Sahib of Nawanagar{Jamnagar}

Ideally some be retired back in its original form.

Ideally it be returned back in its original form

The work of barbarians; those today should be treated as such.

If this picture was taken in 1895 was Aurangzeb alive then? Aurangzeb died in 1707 AD.

why shame? Did you demolish the temple? feeling Sorry, yes....!

In that case, finally, he is doing some good for the humanity.

Feeling shame for being Hindu as still today we not learned anything. Still enjoying deep sleep.

Auranzeb didn't convert it to any mosque.

Nobody is sleeping....and what will we do when awake? This is history and time takes its toll. Even Ghazni and his Kingdom did not live forever.....neither did Ram and Krishna.

rita So wat dou want Hindus to do?

Remember the lessons taught by our Maharishis.....and give up attachment to things that will perish with time.....I think so....I could be wrong...

Check d fact. I m Surprise that still today we have supporter of Aurangzeb. :(

There is instance in the history that a Hindu king demolished worship place of other religion. That's true tolerance.

thanks for the link, but it does not say Aurangzeb built a mosque...?!!

My intense is not criticising Aurangzeb nor have any personal problem with him.

mr.ramawat i am surprised that there are lot of persons like you whose brain has been washed by rss.when somnath was destroyed aurangzeb was not in this world.

.....By 1665, the temple, one of many, was once again ordered destroyed by Mughal emperor Aurangzeb.[20] Later the temple was rebuilt to its same glory adjacent to the ruined one.....