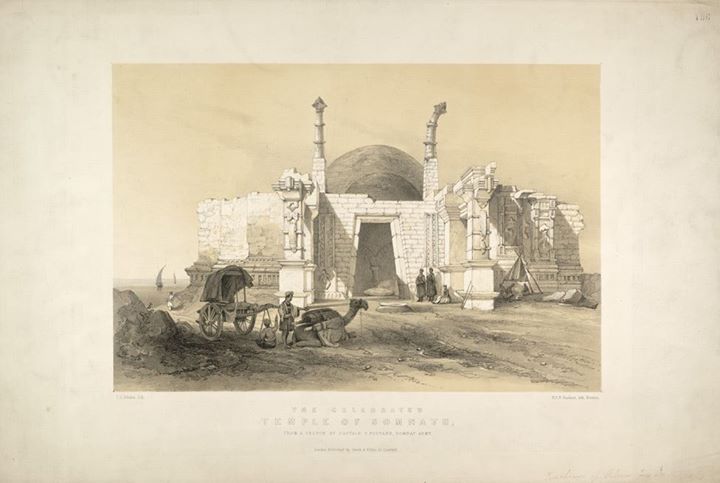 The celebrated temple of Somnath - 1850

Lithograph by T.C. Dibdin from a sketch by Capt T. Postans of the Somanatha Temple at Somnath, Prabhas Patan, in Gujarat, dated c.1850.

Prabhas Patan is an important Hindu pilgrimage centre, considered to be one of the sights of Shiva's Jyotirlingas. The Somanatha Temple was originally founded in the 10th century on the shore of the Arabian Sea. The wealth of the temple attracted many raiders, such as Mahmud of Ghazni who destroyed the sanctuary in 1026. Later the temple was rebuilt during the Solanki period by Kumarapala (r.1143-72). The temple as it stands today is a modern reconstruction in the traditional Solanki style.

Rebuilt in 1949, the Eternal shrine of Somnath Mandir is located at Prabhas Patan near Veraval in Kathiawar, Saurashtra, the Shivalinga is 12th Jyotirling where Shiva appeared as a fiery column of light जय "हर हर सोमनाथ महादेव "

Amazing information. Twice I happend to Som Nath temple day by day restriction sre being toghtened. Thank you for information Your other informations about science is beyond to my understanding. But I noticed them. People must be benefited from those articles. Yhank you