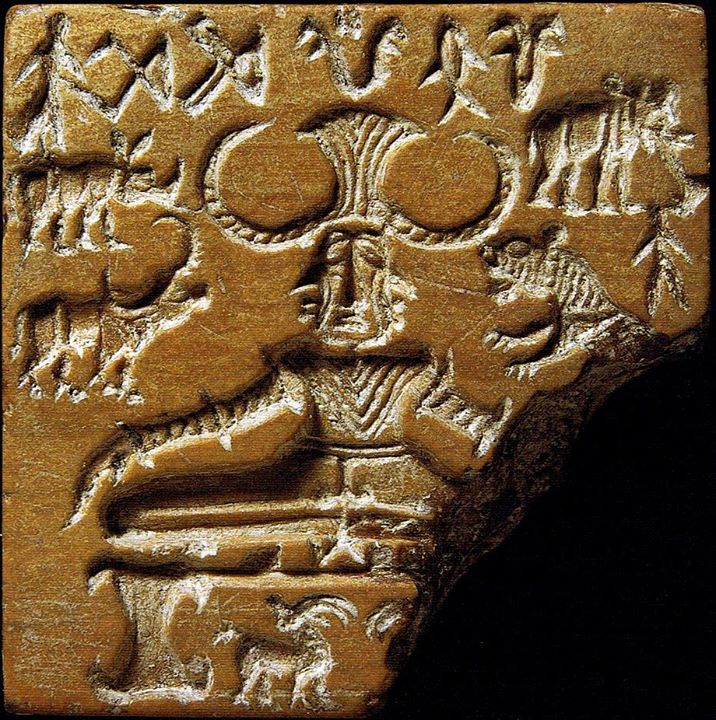 Audio:
Yoga down the ages
A discussion by Sahana Singh with Raj Vedam

What evidence do we have of yoga being practised in ancient times? Do the Vedas, Upanishads, Jain/Buddhist texts, Arthashastra and other texts specifically mention yoga in the way we understand it today? What evidence do we have that it spread to other cultures? Raj Vedam from Indian History Awareness & Research answers these and other questions in this radio show featured on Voice of Sanatan Hinduism.

Listen in to get some gems of information:

An important takeaway from this conversation: "Christianity encountered yoga along two paths – the Eastern path picked it up from Buddhism and Hinduism, whereas the Western path picked it up from Spain via the Muslims. The Eastern Orthodox Christians use a form of meditation called Hesychasm founded by Gregory (in Armenia) 6th century CE, where special postures and breathing rituals are used, accompanied by the repetition of a short prayer like a mantra. In Western Christianity, Aquinas in the 13th century CE declared that meditation is necessary for devotion, expanded upon by John in the 16th century CE and Theresa of Avila, who meditated for hours each day using the rosary and contemplating Christian symbols."

Sahana Singh can you please tell me from where you got that Muslims in Spain used to practice Yog? I appreciate if you can proof it with any authentic source, I prefer Arabic sources because their mother tongue was Arabic language. Thanks,.

Rare Book Society of India I have all these images mentioned in Bahr al-Hayat of Muhammad Ghawth of Gwalior who was deeply impressed by the life and thought of the Yogis that he translated Amrit Kund into Persian under the title of Bha-u'l Hayat'. But we don't know whether he used Arabic version we well. Also we don't know who the real Arabic translator of the Amrita Kund is, and when it was translated into Arabic language. Kindly, note that there are at least 80 copies for the Arabic version. The Arabic text was first edited from 5 MSS by Husain (1928), but unfortunately this edition contains numerous errors and omissions. I have been working on the Arabic translation based on a superior text established by comparison of 10 of 15 extant MSS." Can I request you to send this copy to me? Alamazami786@gmail.com

I think Yoga came to hinduism far more earlier then Buddhism, and whether muslims of spain knew yoga is very debatable if not far fetched idea, for yoga has never been accepted by muslims since time immemorial.

Have you listened to the programme? It does mention that yoga would perhaps have been in vogue even before it got mentioned in Upanishads and other texts. As for "yoga not being accepted by Muslims since times immemorial", that is not what the facts show. Meditation techniques (which are considered as part of yoga) from India travelled far and wide, and got culturally appropriated by myriad cultures including Islam. For example, take the use of prayer beads. The earliest use of prayer beads was carried out by Hindus (japmaala) which was adopted by Buddhists and later in Islam (Misbaha, Tasbih) and Christianity (Rosary).

Sahibe Alam Azami Nadwi: It is indeed extraordinary that you are working on this book and are well versed with the details of Bahr al-Hayat. I do not possess a copy of this book, rather I came across this site where these 4 folios have been posted. It might be worthwhile to ask the admin of this blog for images of all the pages of the MSS: http://bit.ly/1HfWrwd

This picture is a seal used during the Harappan culture.

Yes it is the Pashupati seal showing an ascetic like figure (perhaps Shiva) in a pose of yogic meditation.

Sahana Singh, another takeaway is that the orgins of yoga go beyond its first reference (say in the Vedas). In other words, the existence of a concept or idea generally often begins before its first mention. This could be an interesting area of research in itself!

Sahibe Alam Azami Nadwi: I don't have specific references for you, but there is scope to research it from the material below. From your question on proof of practice, it appears necessary to define yoga. Please listen to the program to know that Yoga is defined with much, MUCH bigger scope than Asanas alone. The Muslims of 9th-12th century were knowledge-consolidators/compilers. Compiling knowledge should not be seen as necessarily practicing that knowledge! Your question then should be what aspects of Yoga were practiced or known by the Muslims? Al-Biruni, in his "Bibliography of Razi" - "Risala fi fihrist kutub Muhammad ibn Zakariya al-Razi", also lists a book on Patanjali in the 10th century CE, among the 184 books. Al-Razi's works were widely disseminated in Latin. In the program I also mention Al Ghazali who advocated yogic meditation (he wrote this in Persian in "Alchemy of Happiness"??). Al Biruni himself wrote on the Yogasutras. A second path for transmission: Ammonius Saccas (3rd Century CE), probably an Indian philosopher/yogi resettled in Greece, reconciled Plato and Aristotelian philosophies in accordance with Indian philosophy. His most famous student, Plotinus, founded the Neoplatonism school, where there is substantial influence of Vedanta - perhaps forming the bedrock itself, with "the One/Brahman". Neoplatonism which believes in reincarnation, sought philosophical contemplation - which is synonymous with "samadhi", to attain "perfection" and happiness, and believed that such souls would merge with The One, while lesser souls would be reincarnated. Contemplation/Hesychasm was seen as withdrawing from the senses, focusing inward, and repeating a short prayer, with the goal of spiritual union with "God". Neoplatonism greatly influenced early Islamic philosophy, till its squashing by Al Ghazali, a Sufi. Aquinas who was deeply influenced by Neoplatonism, sought to reconcile Aristotelian thought with Christianity, in his work, "Summa Theologica". In December 1273, he stopped writing this work, leaving it incomplete, after having a yogic experience of ecstasy/revelation. When asked why he wouldn't finish the work, he replied that it was too insignificant now, compared with what was revealed to him. Aquinas popularized meditation/contemplation in Europe in a Christian garb. What we have to show is how Aquinas encountered Aristotle and Neoplatonism. Plotinus was translated into Arabic in the 9th century CE, under the title "Theology of Aristotle", probably under the supervision of Al-Kindi (I don't have the Arabic reference), and subsequently rediscovered by Europe. There are supposed to be 42 sources for Aristotle in the Arabic and other sources translated to Latin. Aquinas who studied in Naples had access to these translated works. Aquinas was also influenced deeply by Al Ghazali, who is referenced in the radio program as advocating yogic meditation. Thus Yoga influenced the Muslims, and via Spain - in one path - influenced the Christians. There is no claim that asanas were practiced by Muslims, despite the recent attempts by a few to liken sajda/sajadat as asanas.

Here is a reference to Alberuni's translation of Yoga Sutras. He struggled to translate Sanskrit words like Klesa and had to coin new Arabic words! https://books.google.com/books?id=0ZGrAgAAQBAJ&pg=PA156&lpg=PA156&dq=albaruni+yoga+sutra&source=bl&ots=_PmzhlSOUQ&sig=Vjs0MdXtlXJ9YonUzCH8WwcrUVM&hl=en&sa=X&ei=HW6LVc-VEoXAtQW_2qjwAQ&ved=0CCAQ6AEwAA#v=onepage&q=albaruni%20yoga%20sutra&f=false

Thanks to people like you who appreciate such discussions!

I am admiring the very stimulating discussion here. Such things reinforce.my faith in humanity and the faith that each human being prefers to practice

Wonderful insights and very lucidly explained in the program. It is extremely important to stop secularization of our cultural heirlooms. India was trading with Arabian Peninsula, Indian Ocean Countries, Rome, Levant/ Anatolia region both by silk route and maritime routes much before the birth of Jesus not to talk of Islam which came much later. Sufis propagated universal brotherhood which was one of the reasons they were prosecuted in many countries. Yoga is very much a Hindu way of life and if others are not interested in it' s benefits so be it.

Raj Vedam: Brilliantly elucidated! Thank you. Would it be possible for you to tweak and redraft this comment so that I can post it as an 'essay' on this page?

Wonder how this can be researched, though. Perhaps, if they can find bodies of yogis who passed away during the course of their meditation which can be dated to times pre-dating the oldest scriptures? In the Himalayas, it might be possible for such bodies to be found.

Khajuraho may help us.

Yes, I can redraft this. Will get back on this.

As it was said in the programme, there seems to be a tendency to take the best parts of Hinduism, secularise it, and then you are left with the bad which is labelled as Hinduism and you can happily bash it.

Yoga had Hindu origins But is universal

Yes it's problematic that the first written evidence is not necessarily the date of origin. By the time someone considers it worthy of notation, it could be quite well established for some time.

So much to learn. Thank you for sharing all this

Interesting how Alberuni is talking about the need for Hindus to engage in comparative studies of religions while his master Mahmud of Ghazni goes about ravaging the most revered of shrines in India and looting their wealth. He describes without a tinge of remorse how Mahmud breaks the "strongest pillar of religion", how he breaks the magnificent idol in Somnath, how the bronze idol of Chakraswamin from Thanesar is broken and placed in front of the mosque of Ghazni, so that people can walk over them and desecrate them.

Your this argument is totally baseless because we have not been talking about the contributions of the kings and rulers in humanities &cultures, who always misused the religions to achieve their political goals.... Whether they were Muslim or nonemuslims...and We never deny that Mahmud Gaznawis' invasions on India was only for the looting the wealths from the Mandirs as well as to collect the taxes & tributes from the Muslim and Hindu kings...he never thought to reside in India, instead his main purpose was to develop the Gazna with the wealths he looted from India... And by the way he had a good number of Hindu soldiers in his army and some of them were generals who always participated in his all 17 invasions on India...

Looks like you are missing the point and getting overly defensive. My observation was that Alberuni seems to find nothing wrong in his leader's breaking of idols and desecrating the very religion that he has come to study in detail (please don't make it seem like all kings were doing this). This is something that was also noted by Edward Sachau, who translated Alberuni's work on India.Sachau said that Alberuni "scarcely reminds the reader of the incessant war between Islam and India, during which it had been prepared, and by which the possibility of writing such a book had first been given."

Neither I am getting defensive nor missing the point. The question is whether or not al-Biruni wrote about his master's war activities or compiled a biography of his life? He just wrote about the subjects he was interested in. And he could certainly be accused of finding nothing wrong with his leader's breaking of idols, if he wrote about Mahmud's military activities and did not condemn or missed these points intentionally or unintentionally. As for Edward Sachau, he just tried to link Mahmoods' invasions on India to Islam. I recommend you all to read the book "The Life and Times of Sultan Mahmud of Ghazna" by Muhammad NÄáº“im who prepared it with the help of original Arabic and Persian contemporary sources. Detailed information is given in this book on Mahmud's seventeen expeditions into northwestern India and its real purposes which I have mentioned in my previous comment.

Sumedha Verma Ojha, this is the discussion of the radio show I mentioned.