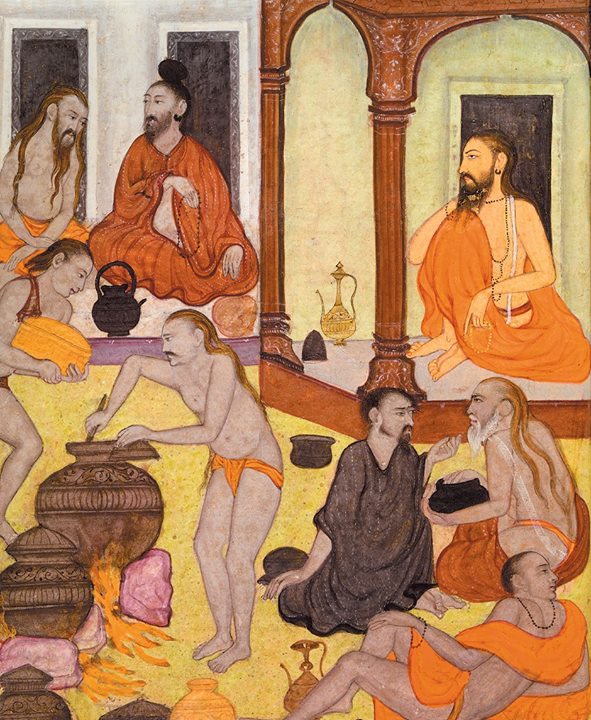 Article:
Under the Spell of Yoga
By William Dalrymple
The New York Review of Books - March 2014

Around 1600, a dramatic shift took place in Mughal art. The Mughal emperors of India were the most powerful monarchs of their day—at the beginning of the seventeenth century, they ruled over a hundred million subjects, five times the number administered by their only rivals, the Ottomans. Much of the painting that took place in the ateliers of the first Mughal emperors was effectively dynastic propaganda, and gloried in the Mughals’ pomp and prestige. Illustrated copies were produced of the diaries of Babur, the conqueror who first brought the Muslim dynasty of the Mughal emperors to India in 1526, as well as exquisite paintings illustrating every significant episode in the biography of his grandson, Akbar.

Then, quite suddenly, at this moment of imperial climax, a young Hindu khanazad (or “palace-born”) prodigy named Govardhan began painting images of a sort that had never been seen before in Mughal art. They were not pictures of battles or court receptions. Instead they were closely observed portraits of holy men performing yogic asanas or exercises that aimed to focus the mind and achieve spiritual liberation and transcendence. The results of Govardhan’s experiments in painting—along with a superbly curated selection of several hundred other images from the history of yoga—were recently on view in “Yoga: The Art of Transformation,” a remarkable exhibition at the Freer and Sackler galleries in Washington, D.C., which will travel next to San Francisco and Cleveland.

Govardhan’s images of holy men are works of penetrating intensity. They use the same skills of characterization and portraiture that the artist had learned from his close study of the Renaissance gospel books brought to India by the Jesuits. These portraits are as beautifully drawn and observed as anything Govardhan had painted before, with carefully stippled faces and the artist’s characteristically precise delineation of the subjects’ noses and cheekbones. But they are no longer the familiar courtiers or princes, seekers of power or pleasure. Instead these humble sadhus outside their huts, hair matted, limbs entwined, are engaged in a much harder quest: the long and arduous journey toward enlightenment.

The reasons behind this radical shift lay partly in geography and partly in politics. In the early months of the seventeenth century Crown Prince Salim, the future emperor Jahangir, had rebelled against his father Akbar. While the emperor was distracted by his attack on the Sultanate of Ahmadnagar to the south, Salim came close to setting himself up as a rival emperor in the north, making his own appointments and running his own imperial administration. It was exactly during the period of Salim’s rebellion, from early 1600 to November 1604, that Govardhan’s art underwent its transformation.

The place Salim chose as his power base was Allahabad, previously known as Prayag. This was one of the most sacred places in India for Hindus: the point at which the two holy rivers of the north, the Yamuna and the Ganga, come into confluence. Prayag has always been a place of congregation for holy men, and in the seventeenth century it seems as if the great ascetic gathering we know today as the Kumbh Mela took place there as regularly as every five years, not on the current twelve-year cycle.

Image:
Detail of ‘The Feast of the Yogis,’ from the Hindi Sufi romance Mrigavati, Allahabad, 1603–1604

you people are doing a great job. thanks for sharing.