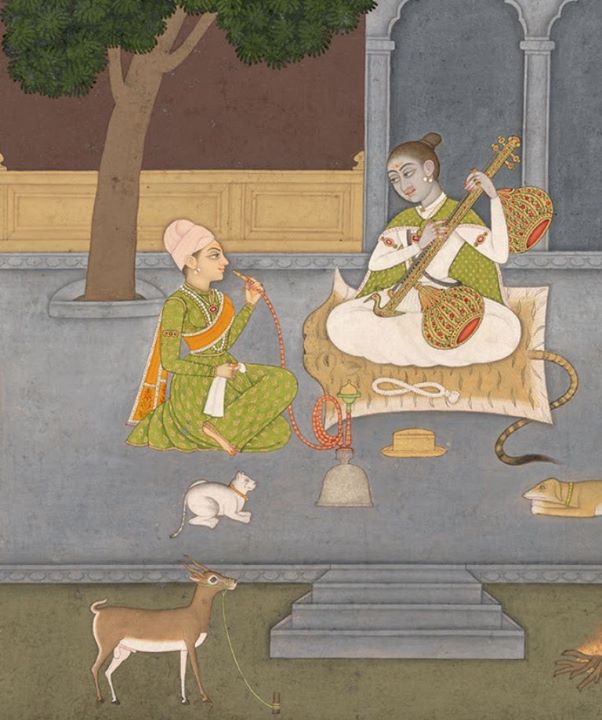 Yogis were a cherished theme of painting, in which they were an intriguing foil to the art’s materialism. In illustrated ragamala paintings, each of which depicts a scene associated with a musical mode, images of holy men infuse music and painting, love and pleasure with divinity, lifting aesthetic delectation into a more serious register. With its strange contrasts, Bhairava Raga perfectly exemplifies the frisson that the aesthetic and the ascetic can arouse together (cat. 18b). The Hindu god Shiva, smeared in ash, sits with a yogapatta clasped around his bent legs, vina in hand, a garland of severed heads around his neck. He is the ascetic god, king of the cremation grounds, of abstinence and renunciants. Yet as he reaches a hand out to clasp the fingers of the woman before him, he apparently succumbs to her amorous enticements and her world of sinuously necked wine bottles, richly patterned textiles, cooling fountains, and restless peacocks, one of whom struts on the roof above, searching for his mate. Or does Shiva draw her to himself and his world of death and extremes? At the heart of the painting, Shiva and his music tease mortals with a seemingly impossible collaboration between material desire and its transcendence that wells up again and again in India’s raga and ragini paintings.

Ragamala paintings illustrate poetic verses associated with musical modes. Traditionally in India, musicians do not perform written compositions. Instead, a musician’s every performance is a unique improvisation on a “framework” of musical patterns called a raga or ragini. A raga or ragini is defined by the mood it conveys as well as by a wide variety of musical specifications that include the notes assigned to it, which notes are dominant, whether certain notes are sharp or flat, how its notes rise and fall, and characteristic melodic motifs. By the fourteenth century, ragas and raginis were being organized into families. A common system recognized six raga husbands, each “married” to five ragini wives for a total of thirty-six ragas and raginis. Families of musical modes sometimes included sons or ragaputras as well. A complete set of ragas and raginis was called a ragamala (or garland of ragas). Each raga, ragini, or ragaputra was associated with a verse or verses describing it as a hero, heroine, ascetic, or deity, and with an image that depicted it. The compositions and iconographies of ragamala images quickly became fairly fixed and easily recognizable. The composition of Bhairava Raga with his beloved in cat. 18b, for example, appeared repeatedly in subsequent illustrations. Nevertheless, all elements of the ragamala were subject to change and many variations exist.