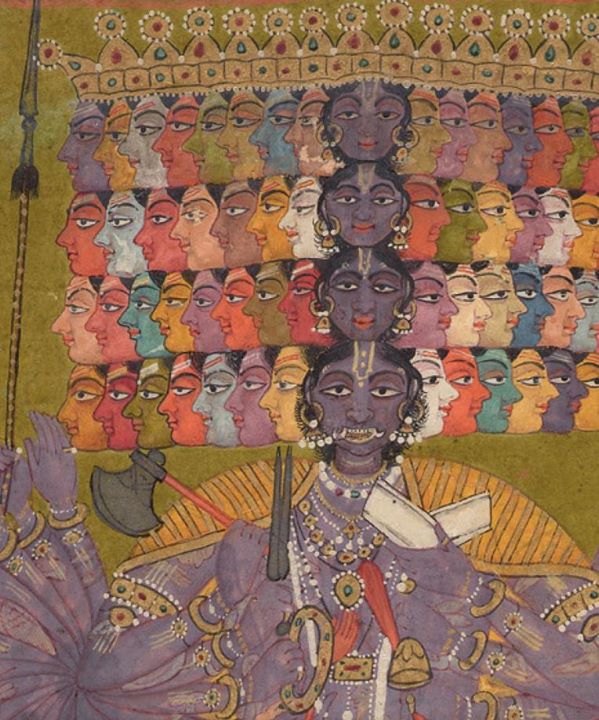 Essay:
The Path of Yoga
By Debra Diamond

Like yoga or indeed any aspect of India’s Hindu traditions, the identities of yoginis (female embodiments of yogic power) reveal continuous and multiple transformations over time and across sectarian, religious, lay, and geographic boundaries.

Hindu and Buddhist Tantras of the seventh to twelfth century blur the distinction between human and divine, identifying yoginis as both powerful goddesses and the mortal women who ritually became those deities.2 These yoginis offered Tantric adepts the “fruits of yoga,” and the ability to “subjugate the three-fold (i.e., entire) universe.” Hindu Kaulas were influential in defining them as potentially dangerous hordes of flying goddesses who could, when ritually placated, bestow upon mortals the powers to fly and transcend time and death. Classed as Tantric because their primary goal was power (rather than spiritual liberation), Kaulas gave access to their radical teachings only to initiated disciples.5 These adepts invited the fierce yoginis to enter circles—more specifically, yogini chakras and more broadly, yantras (“tool” in Sanskrit)—that they mentally or physically constructed, then propitiated them with liquor or animal flesh and blood. For Kaulas, the detachment necessary to cross boundaries and integrate polarities, such as the social distinction between pure and impure, was a critical step in attaining a higher state of being.

By the late ninth century, Hatha yogis, orthodox Hindus, and monarchs began appropriating and domesticating Tantric yoginis. Kings seeking worldly control were among their most prominent devotees. Across the Indian subcontinent, they constructed large stone yogini temples that were often prominently situated upon hills or close to orthodox temples. Open to the sky, many were constructed on round plans akin to yogini chakras, with forty-two to 108 sculptures of yogini goddesses set into niches on their interior walls. The royally patronized temples mark the entry of the Tantric hordes into both visual culture and more conventional forms of Hindu worship.

When we stop reading, we start dying. Uphold this fact by either reading a book or writing a book. Book lovers, here is a novel for your free download; Royal Somersault. Use this link https://freeditorial.com/en/books/49383 and download PDF. It is one of my contributions to the book world.

Very well written...Chuks-Victor Ojei! You are indeed a gifted writer.

Thanks for the commendation, it has invigorated me.

Excellent word-flow and engaging insights from the word go...mark of an interesting writer!