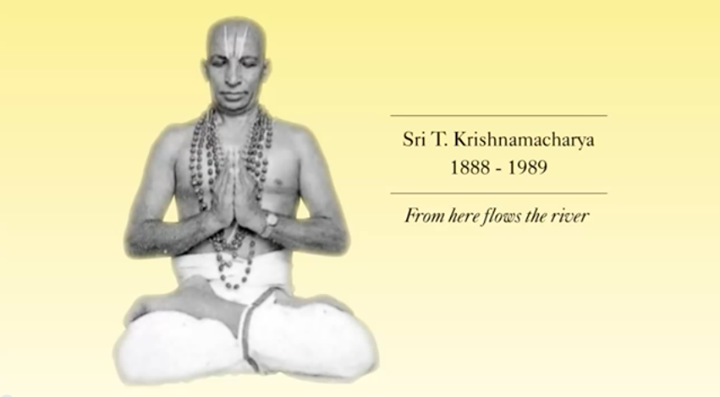 Krishnamacharya was unique in many ways — as a master of yoga, as a teacher, as an Ayurvedic physician and as a scholar.

In the West, Krishnamacharya is mostly known for his contribution to the revival of the more physically oriented disciplines and practices of hatha yoga. Therefore, he is often referred to as “the father of modern yoga.”

The notion that Krishnamacharya practiced and taught yoga that was somehow “new” or “modern” is primarily due to the many distortions or misunderstandings about the link between the physical practices of hatha yoga and the meditational practices of raja yoga. He was the conservator of the ancient teachings of raja yoga.

As a master of yoga and a great scholar, he practiced and linked the physical practices of hatha yoga with the mental states of samadhi described in the Yoga Sutras of Patanjali. Let us listen to the great master on what is yoga.

Krishnamacharya: Yoga is an awareness, a type of knowing. Yoga will end in awareness. Yoga is arresting the fluctuations of the mind as said in the Yoga Sutras (of Patanjali): citta vritti nirodha. When the mind is without any movement, maybe for a quarter of an hour, or even quarter of a minute, you will realize that yoga is of the nature of infinite awareness, infinite knowing. There is no other object there.”

During my interview of Krishnamacharya in 1988, he continued to expand on his personal experience of this yogic state of samadhi.

This state of samadhi — the pinnacle of sustained mental focus and the goal of classical yoga — can be reached through pranayama. Krishnamacharya used to say that pranayama is critical among the eight limbs of yoga. The practice of pranayama is preceded by the practice of the mudras and the practice of asanas. These are truly amazing photos of the great master.

In addition to his mastery of asanas, Krishnamacharya was able to bring the involuntary functions of the body — like the heartbeat — under voluntary control.

He was not only a master of yoga but also had titles equivalent to doctoral degrees in all the six Vedic darshanas.

Krishnamacharya taught yoga for nearly seven decades. He started teaching yoga under the patronage of the Maharaja of Mysore in the 1930s. Indra Devi, B.K.S. Iyengar, and Pattabhi Jois studied with him during this period.

What was Krishnamacharya teaching during the 1930s? The silent film from 1938 contains the yoga practice of Krishnamacharya, his wife and children, and B.K.S. Iyengar, who was also the brother of his wife.

An analysis of this 1938 video will reveal that Krishnamacharya’s teaching was based on this principle — “Teach what is appropriate for each individual.”