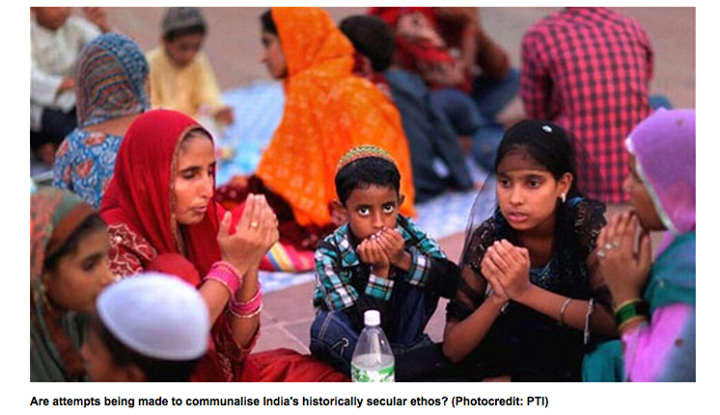 Article:
Why Muslims and Christians are safer in India than most places on earth
By Minhaz Merchant
daily O - 2nd June 2015

Our country, the birthplace of nearly half the world's nine major religions, has long been a haven for the other half.

When the Narendra Modi government took office last May, dire warnings were issued. There will be communal riots, predicted one newspaper. The Samajwadi Party (SP), the Left and the Congress joined the chorus. The Economist, analysing Modi's first year, wrote: "This newspaper chose not to back Mr. Modi in last year's elections because of his record on handling religious strife … We are happy that our fears of grave communal violence have so far not been realised."

Keki Daruwala, a former member of the National Commission for Minorities, challenged that view in The Economic Times in an article on May 30, 2015, provocatively titled: "So What If There's Been No Riots?"

Daruwala wrote: "There has been no sectarian riot worth the name since the NDA government came to power in May 2014. But is this the measure of the well-being of minorities? No houses burnt, no Muslims or Christians stabbed, so all is hunky-dory? Rajeshwar Singh of the Dharam Jagran Samiti, the man reportedly behind the RSS' ghar wapsi programmes, states in Etah, UP, that 'India, will be made free of Muslims and Christians by 2021. India is the country of Hindus alone.'"

Two articles (including one last week) by Julio Ribeiro, the former director-general of Punjab Police, argued in the same vein as Daruwala: no riots, true - but Muslims and Christians are unsafe in India, circa 2015.

It is time, therefore, to bury this myth and exhume the facts.

India is secular not because Indira Gandhi inserted the word into the Constitution in 1976 but because Hindus are innately secular. Of the world's major religions, Hinduism is the only one without a prophet. No one "founded" Hinduism - unlike Christ, Mohammad, Zoroaster, Abraham, Confucius, Mahavira, Buddha and Guru Nanak.

Hinduism, or Sanatana Dharma, evolved organically. The Vedas (circa 1800 BC) predate the second oldest religious text, Judaism's Torah (circa 1300 BC), by several hundred years. Sanatana Dharma is the world's oldest organised religious philosophy. It was followed by Judaism, Zoroastrianism and then in quick order by Jainism, Buddhism, Confucianism and Christianity. Islam is a relatively young religion as is Sikhism. Of these nine major faiths, four were born in South Asia (Hinduism, Buddhism, Jainism and Sikhism), four in West Asia (Judaism, Zoroastrianism, Christianity and Islam), and one in North Asia (Confucianism).

Thus every major religion is of Asian origin. Europe appropriated Christianity through Rome. Jesus Christ was a brown-skinned, dark-haired Semitic Jew born in Bethlehem. His ancestry was Middle Eastern. Later depictions of him in popular culture (movies, plays, photographs, media) showed him as Caucasian with European features and fair hair. The myth endures.

India, the birthplace of nearly half the world's nine major religions, has long been a haven for the other half. The first Jews arrived in India on the Malabar coast in 542 BC and form one of the world's oldest and most peaceful Jewish communities. (India, unlike Europe, has never seen anti-Semitic persecution.). The first Christians came to India, again in Kerala, in 52 AD, before Christianity had even encountered Europe. Zoroastrians fled Islamic persecution in Persia (today's Iran) and found refuge in Gujarat in 720 AD, becoming one of India's most successful communities (Parsis).

Tarek Fatah has said in an interview that if due any reason the world is to be destroyed but India survies, it will still be fine as India has the whole world within itself.

its a great information, i request to all my friends to give your valuable time for this column.

An eye opener for all pseudo-secularists.

Let me correct you..... 'Mahavir' not founded Jainism.....Jain Religion is also ancient...... Scholars like Prof. Buhler, H. Jacobi, J.G.R. Forlong, Dr. Hornell, Pt. Sukhalalji, Prof. Vidyalankara, and others believe that Jainism is the earliest known religious systems prevailing in India among the non-Aryan races and was widespread in the Indus Valley. The relics found in Harrapan excavations like the standing nude male figures in Kayotsarga, idols in Padmasana and images with serpent-heads, and the Bull symbol of Vrshabadeva, represent Jain culture. Please do more research before you write.....

Abhay Magdum dont write agdam sagdam. Serpent Heads is nothing But Lord Vishnu . Jainism is a part of Hinduism and a branch of the Great Banyan Tree known as HINDUISM, Jainism is a very recnt entry in india just a few thousand years ago... 2100 Maximum.

Sorry. Jainism and Buddhism are barks-outlets-flings-branches from Hinduism.

Jainism is different Yes. Agreed. It is the child of a Father who chose to run away and make a new Home. So it is different.

I would also like to know which Tirthnkars reference was found in which Vedas. Please educate me.

ONLY Hinduism was Ancient. rest all religions are the inventions of those Smart Ones who choose to defy their own Religions and create a new Sect.

This includes Sikhism, Buddhism and Jainism.

Minhaz Merchant Sir. Very nice presentation. On communal issues it is this self persecuted mentality of Muslims that is bordering on abusive languages + self pity that had blessings of 100 years from so called secularist like Motilal Nehru to Rahul Gandhi + Congress Party that has closed all doors for Muslims/ intellectuals to look at Modi/ R SS ...a fresh/ denovo with open mind. Roits free one year has gone by....has any one given any credit to Fatwa free India.These days educated Muslims laugh at these Fatwas and if they can help...they will drink half a bottle per fatwa....

update ur knowledge bro.... still believing in aryan invasion theory...?? its proved that this was made to divide people... AIT IS HOAX

Btw aryan is not race

Jainism when evolved was a way of living .... It was not an old religion ..... Also There is no jain language ..... Jain texts take help of hindi and gujarati alphabets and grammar ..... I dnt know who taught u all that ..... But it is rubbish

Lo behold when did lord mahavira become founder of jainism ? Its ancient religion than believed almost little later than vedic religion.lord adinath(rishabnath) was its 1st thirthankar