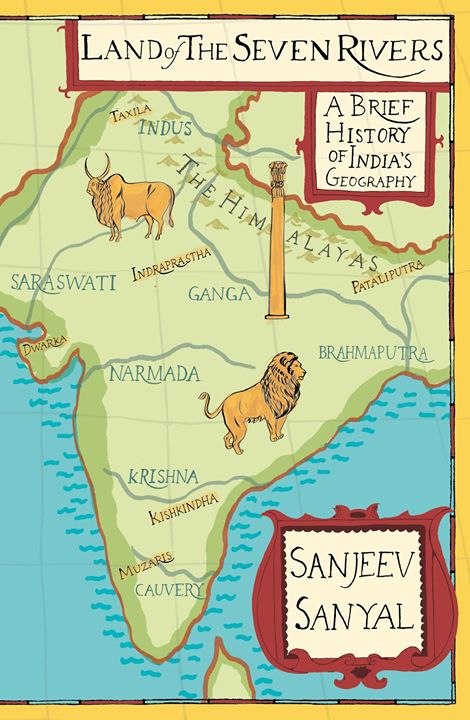 New Book:
LAND OF THE SEVEN RIVERS
A Brief History of India’s Geography
By Sanjeev Sanyal
Published by Penguin - 2013

DID THE GREAT FLOOD OF INDIAN LEGEND ACTUALLY HAPPEN? WHY DID THE BUDDHA WALK TO SARNATH TO GIVE HIS FIRST SERMON? HOW DID THE EUROPEANS MAP INDIA? The history of any country begins with its geography. With sparkling wit and intelligence, Sanjeev Sanyal sets off to explore India and look at how the country’s history was shaped by, among other things, its rivers, mountains and cities. Traversing remote mountain passes, visiting ancient archaeological sites, crossing rivers in shaky boats and immersing himself in old records and manuscripts, he considers questions about Indian history that we rarely ask: Why do Indians call their country Bharat? How did the British build the railways across the subcontinent? Why was the world’s highest mountain named after George Everest? Moving from the geological beginnings of the subcontinent to present-day Gurgaon, Land of the Seven Rivers is riveting, wry and full of surprises. It is the most entertaining history of India you will ever read.

‘Land of the Seven Rivers’ is a guidebook to India’s geography, as well as sparkling miscellanea about everything from Asian elephants to standards of beauty

India spawns ideas as vigorously as it spawns diverse populations. Such, at least, is the impression conveyed by Land of the Seven Rivers, a book that good-naturedly examines a huge range of India-related topics, from mitochondrial DNA to modernist architecture.

Ostensibly the book’s subject is Indian geography, and to some extent this defines Sanjeev Sanyal’s approach. He certainly begins with the shifts of tectonic plates that over millions of years nudged the subcontinent up against the Asian mainland, goes on to examine the evidence for the origin of India’s populations, and so proceeds to the partition of 1947 and the subsequent absorbing of French and Portuguese enclaves.

En route he covers the drying up of the once legendary Saraswati River (one of his particular interests), the writing of the Kamasutra, the extraordinary rule of the Mughal emperor Akbar, the anti-British revolt of 1857, and much more. Where geography isn’t central to the phase of the story he’s telling, he highlights particular locations, sometimes visiting them and reporting on their current condition. Geography, in other words, is mainly a way into the exceptional richness of Indian history.

Sanyal is a high-profile economist with an interest in environmental problems, and is “global strategist” for Deutsche Bank. He’s a serious proponent of walking as a sustainable mode of transport, and at the age of 39 in 2010 was picked out as Young Global Leader for the year by the World Economic Forum at Davos.
Born in Kolkata (Calcutta), he appears essentially Bengali in descent. He relates that many members of his mother’s family didn’t move to India’s West Bengal from East Pakistan (now Bangladesh) until the early 1960s, and that his father was one of the first officials sent to administer Sikkim after it voted to join India in 1975.

This book positions itself very nicely between being a research-based account and a leisurely stroll through Indian history. There are end-notes giving the sources of various statements, such as the total number of lions remaining in the country, but as the book is in no way polemical there’s no feeling that the notes support statements that are in some way controversial.

Where contentious issues do come up, as they’re bound to, Sanyal is noticeably centrist and even affable in his approach. On the major question of the partition of India and Pakistan in 1947 he says he doesn’t want to go over the whole complex affair yet again. And whenever the British Empire comes up he displays a generously even-handed approach.

The book is strong on unusual facts. I was astonished to read, for example, that the UK barrister who mapped out the line of partition between India and Pakistan in 1947, in Delhi but without having time to inspect the situation on the ground, actually returned his fee of 2,000 UK pounds (almost enough to buy a small English house in those days) following the mass migration and killings that followed his work.

Also of great interest is India’s estimated proportion of world GDP — a possible 33 percent in the first century AD, compared to 4 percent at Independence. The Roman Empire is estimated having had 21 percent. And 500 years ago a dark skin in India was markedly preferred to a light-colored one, as many sources confirm.

Sanyal is also informative on the Great Trigonometrical Survey of the 19th century, culminating in the height of Everest being set at 29,000 feet, with an extra two feet added for credibility. The height today is set at 29,029 feet, or 8848 meters.

The Parsis feature briefly as active in the 19th century opium trade in southern China — significantly in this context, there’s a Parsi graveyard in Macau. Also of great interest is the account of the newly independent India’s border disputes with China, notably over Aksai Chin. We learn, too, that the Asian elephant is more closely related to the mammoth than to the African elephant, that the Buddhist king of Thailand has to have Hindu priests officiating at his coronation and that the Aurobindo ashram is the most enduring legacy of the French occupation of Pondicherry (modern Puducherry).

Sanyal naturally has some personal preferences. He thinks the full-moon in Ladakh is more impressive sight than any other he’s seen in the natural world, and he has a noticeable affinity with the Aravalli Range in western India (“the oldest discernible geological feature on this planet”). He wrote the book, though, in the brash new boom-town of Gurgaon. He finds it both emblematic of what modern India can achieve, and full of difficulties of which he has “more than enough personal experience.”

But he’s not one to complain unduly. A skittish tone surfaces occasionally, such as when he comments on an ancient bathing site specifically protected from crocodiles, “very sensible in my view; it can really spoil your day to have a limb bitten off while frolicking in the pool with the ladies.” This doesn’t sound like someone likely to go out of his way to expose the doings of Gurgaon’s “unscrupulous property developers.”

At one point Sanyal refers to the modernist architect Le Corbusier as a fascist. This is almost certainly overstepping the mark; other sources consider his affiliation with fascism, anti-semitism and extreme nationalism to be unprovable.

This book is essentially an easy-going but reliable narrative covering some of the highlights of the subcontinent’s story. Here and there I detected a slight “Indian-English” tone of voice, but it’s if anything charming rather than the reverse, and anyway adds to the book’s authenticity. All in all this is a book that can be confidently recommended to anyone wanting an enjoyable and up-to-date introduction to the history of India, whether or not its geography is one’s primary interest.

Aditi Sinha, you can put this on the students reading list.

Ketki Ghaisas How does your opinion match with the review here?

There is no description about godavari river

The UK barrister who lined up the border for india and pakistan without having sufficient time for ground inspection - how much pain in my heart. Even today we are suffering because of this border problem. The complete fate has changed for many. Feeling very sad about this. Your posting is really intetesting. Being a history student I enjoyed every word .