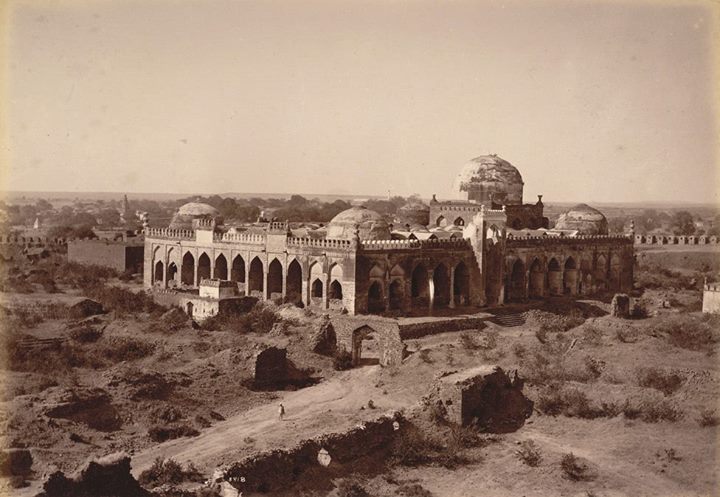 Photograph of the Jami Masjid in Gulbarga, Karnataka, from the Curzon Collection: 'Views of HH the Nizam's Dominions, Hyderabad, Deccan, 1892', taken by Deen Dayal in the 1880s. In the early 14th century the Deccan was occupied by Muhammad Tughluq (r.1325-51) who brought the entire region under the rule of the Delhi Sultanate. Later in the century Gulbarga became the capital of the Bahmani kingdom (1347-1527), a newly founded independent state, until 1424 when the capital was transferred to Bidar. The Bahmanis ruled over most of the Deccan until the late 15th and early16th centuries when the kingdom was divided into five independent states. The Jami Masjid was erected in the fort at Gulbarga by Ala-ud-din Hasan Bahmani Shah (r.1347-1358), founder of the Bahmani dynasty. An inscription records that it was completed in 1367 but aspects of the ornament suggest it was completed in the early 15th century during the reign of Firuz Shah (r.1397-1422). Its plan resembles the Great Mosque at Cordoba. The mosque is unusual as the central area, which would normally have been an open courtyard, is covered over with numerous small domes. Three of the outer walls are not solid but made up of open arcades. The main sanctuary is crowned with a high dome above a square clerestory.