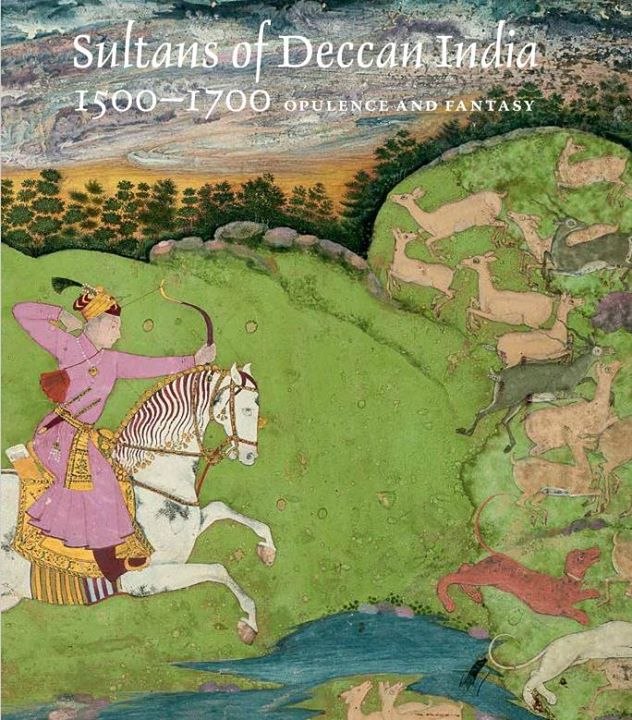 The vast Deccan plateau of south-central India stretches from the Arabian Sea to the Bay of Bengal. In the sixteenth and seventeenth centuries, the region was home to several major Muslim kingdoms and became a nexus of international trade — most notably in diamonds and textiles, through which the sultanates attained remarkable wealth. The opulent art of the Deccan courts, invigorated by cultural connections to the Middle East, Africa, and Europe, developed an otherworldly character distinct from that of the contemporary Mughal north: in painting, a poetic lyricism and audacious use of color; in the decorative arts, lively creations of inlaid metalware and painted and dyed textiles; and in architecture, a somber grandeur still visible today in breathtaking monuments throughout the plateau.

The first book to fully explore the history and legacy of these kingdoms, Sultans of Deccan India elucidates the predominant themes in Deccani art—the region’s diverse spiritual traditions, its exchanges with the outside world, and the powerful styles of expression that evolved under court patronage—with fresh insights and new scholarship. Alongside the discussion of the art, lively, engaging essays by some of the field’s leading scholars offer perspectives on the cycles of victory and conquest as dynasties competed with one another, vied with Vijayanagara, a great empire to the south, and finally succumbed to the Mughals from the north. Featuring some 200 of the finest works from the Deccan sultanates, as well as spectacular site photographs and informative maps, this magnificently illustrated catalogue provides the most comprehensive examination of this world to date and constitutes a pioneering resource for specialists and general readers alike.

MET NYC has a full section on the above subject