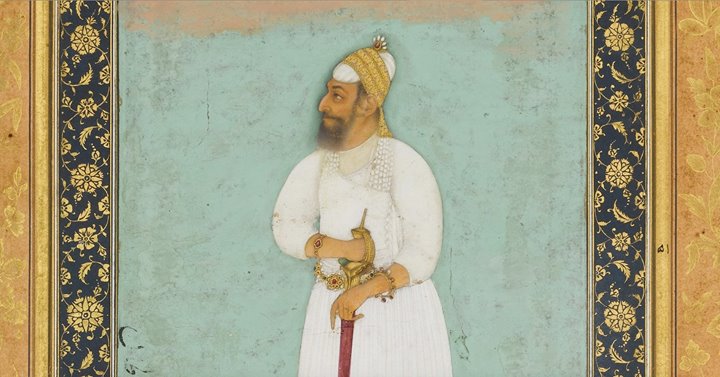 Article:
Move over, Mughals
By William Dalrymple
Times of India - May 17, 2015

Just as the Mughals dominated early modern India politically, controlling all the rich lands from Kandahar down to the Vindhyas, so until recently they have also dominated the work of both modern historians and scholars of art history: for every book on Vijayanagara or the Deccan sultanates, there are one hundred on the Mughals; for every book on Bijapur or Hyderabad, there is a shelf on Delhi and Agra.

As a result, the extraordinary renaissance of the arts in the 16th century Deccan in the sultanates of Bijapur, Bidar, Ahmadnagar and Golconda is only now beginning to receive the attention it deserves. But in the last few years several remarkable new books, four major scholarly conferences and two large exhibitions --one of which opened in National Museum in Delhi in January -have begun to fill this lacuna. All this has recently culminated in a landmark show at the Metropolitan Museum in New York, entitled Sultans of Deccan India 1500-1700: Opulence and Fantasy , brilliantly curated by Delhi-born Navina Haidar.

The highlight of the Met exhibition is unquestionably the room full of Deccani miniature paintings with their luminous palette of rich, jewel-like colours, their sense of make-believe and illusion, their enigmatic shifts of scale and their brilliantly innovative use of marbling orabri, `clouds in the wind'. The show also includes a spectacular collection of masterworks in bronze, silver, stone, glass, lacquer, and fabrics painted or dyed into phantasmagorical patterns.Seeing these objects collected together en masse for the first time, it is now possible to grasp just how richly eclectic and heart-breakingly beautiful much of Deccani art once was.

The Deccan courts were the most cosmopolitan in South Asia, where Persianate Shia culture was cross-fertilised with the very different but astonishingly rich Hindu artistic traditions of southern India, dominated by the great Hinduruled Kingdom of Vijayanagara. The art historian Mark Zebrowski, who laid the foundations for the recent interest with his 1983 volume, Deccani Art, argued that this rich mix produced art unlike that found anywhere else: "Whereas Mughal painting clearly illuminates the world through realistically observed detail, Deccani painting presents us with a civilisation seen through the charmed mirror of poetry...Paintings pulsate with restless lines and riotous colours... aiming to establish a gently lyrical atmosphere, often one of quiet abandon to the joys of love, music, poetry or just the perfume of a flower. Moods are established through fantastic colours. We are admitted into a private world of feeling. Reflection and reverie triumph over dramatic action."

As the works in the Met show demonstrate, while Ahmadnagar and Golconda both produced extraordinary artwork, it is Bijapur that is rightly admired as the most refined and innovative of the Deccani sultanates. The archetypal Bijapur ruler was Sultan Ibrahim Adil Shah II of Bijapur, an erudite scholar, lute player, poet, singer, calligrapher, chess master and an aesthete. Under Ibrahim Bijapur underwent a remarkable renaissance. Though his first love was perhaps music (and his most popular composition a book of Urdu songs) Ibrahim oversaw the creation of a remarkable literary revival and attracted to his court the greatest poets and writers of his day, including Zuhuri, the Persian poet laureate.

Ibrahim had changed the name of his capital from Vijayapur, City of Victory to Vidyapur, City of Learning. According to the chronicler Rafiuddin Shirazi, during his reign the libraries of Bijapur swelled with painted manuscripts as Ibrahim had "a great inclination towards the study of literature and he had procured many books connected with every kind of knowledge. Nearly sixty men, calligraphers, gilders, book binders and illuminators were busy doing their work the whole day in the library."

The artists, writers and craftsmen who worked for Ibrahim were drawn from a wide variety of different backgrounds and religions, and crossed the divide, both between Sunni and Shia, and Hindu and Muslim. For Ibrahim did share one very important quality with his Mughal contemporary Akbar: his fondness for, and interest in, Hinduism.Early in his reign Ibrahim gave up wearing jewels and adopted instead the rudraksha rosary of the Hindu sadhu. He visited both Shaivite temples and the monasteries of the Nath yogis, and knew Sanskrit better than Persian. According to Zebrowski, "it is hard to label him either a Muslim or a Hindu; rather he had an aesthete's admiration for the beauty of both cultures."

In his songs Ibrahim uses highly Sanskritized language to shower equal praise upon Sarasvati, Hindu Goddess of learning, the Prophet Muhammed and the Sufi saint Gesudaraz of Gulbarga.In the 56th song, this Muslim Sultan more or less describes himself as a Hindu God: "He is robed in saffron coloured dress, his teeth are black, the nails are red... and he loves all. Ibrahim whose father is God Ganesh, whose mother is Sarasvati, has a rosary of crystal round his neck... and an elephant as his vehicle." Ibrahim's preferred Sanskrit title was Jagatguru, "World Teacher."

but aren't they being edited out by the RSS/VHP and their bigoted saffron pseudo-history?? very surprised you'd post this.