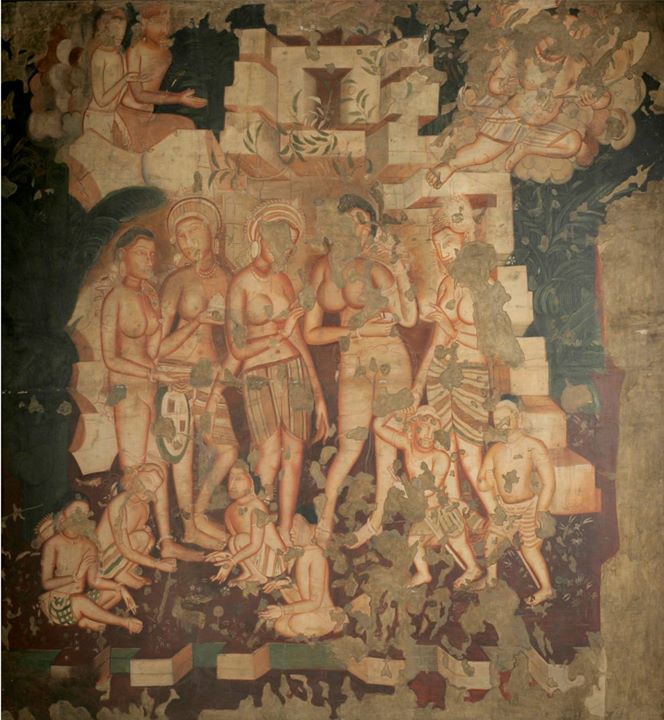 The Dasakumaracarita relates the adventures of ten princes in their pursuit of love and royal power. It contains stories of common life and reflects a faithful picture of Indian society during the period couched in the colourful style of Sanskrit prose.

Dandin was a renowned Sanskrit author of prose romances and expounder on poetics. Although he produced literature on his own, most notably the Dasakumaracarita, first translated in 1927 as Hindoo Tales, or The Adventures of the Ten Princes, he is best known for composing the Kavyadarsa (‘Mirror of Poetry’), the handbook of classical Sanskrit poetics, or Kavya. His writings were all in Sanskrit. He lived in Kanchipuram in modern-day Tamil Nadu in 6th-7th century. A shloka that explains the strengths of different poets says: Dandinah padalalithyam (“Dandin is the master of playful words”).

Image:
Copy of painting in the caves of Ajanta by John Griffiths and students of the Bombay School of Art.

Commissioned by the Government of India between 1872-1885 and deposited in the India Museum, London.

The cave paintings of Ajanta are the oldest surviving examples of painting in India. They depict stories from the lives of the Buddha (the jatakas) and date from the 1st century BC to about AD 480. The cave complex was discovered in 1819 and since then attempts have been made to document the paintings inside them. In 1844 Major Robert Gill was commissioned to make copies. Unfortunately most of the paintings he completed were destroyed in a fire in 1866. To make up for this loss, from 1872, John Griffiths from the Bombay school of Art and seven Indian students spent every winter for the following 13 years at the caves producing approximately 300 paintings, of which this is one.

A small request...please use BCE and CE instead of BC and AD. This is the norm the world over. Given the Indian calendars India has, BC and AD has no relevance anyway.