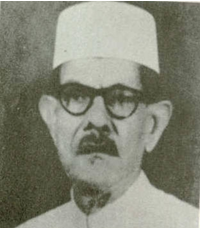 Ghulam Yazdani, OBE (22 March 1885 - 13 November 1962) was an Indian archaeologist who was one of the founders of the Archaeological Department of His Exalted Highness The Nizam's Dominions (Hyderabad State). He also edited the Arabic and Persian Supplement of Epigraphia Indica from 1913 to 1940. He was instrumental in the restoration and conservation of most sites in the Hyderabad state, including the caves at Ajanta, Bidar fort, and Daulatabad.

Early life and career:
Yazdani was born on 22 March 1885 in Delhi. He was educated under Rev. J. Godfrey F. Day and C.F. Andrews.The young Yazdani was also trained under Maulavi Mohammad Ishaq and Shamsul Ulama Maulavi Nazeer Ahmad.In 1903, he stood first in Aligarh Muslim University in his intermediate exams, and in 1905, he stood first in Arabic, Oriental Classics, and English in the B.A. exam, winning three gold medals: the Macleod medal, the Aitchison medal, and the F.S. Jamaluddin medal. He succeeded J. Horovitz as the Epigraphist to the Government of India for Persian and Arabic inscriptions in 1915, and held that office till 1941. In 1907, he was appointed the Professor of Persian at St. Stephen's College in Delhi, and in 1909, H. Sharp (later Sir Henry Sharp) appointed him as the Professor of Arabic in the Government College at Rajshahi in Bengal.In 1913, the Government of Punjab appointed him as the Professor of Arabic at the Government College in Lahore.

Dr. Yazdani visited Bidar for the first time in 1915, drew up a comprehensive program for the thorough repair and conservation of the monuments at Bidar, and the work was carried out by the Government of Hyderabad State under Mir Osman Ali Khan, Asaf Jah VII, the Nizam of Hyderabad. He introduced an illustrated booklet, to serve as a guide-book titled The Antiquities of Bidar in 1917.[8] Later, he completed his book Bidar: Its History and Monuments published by the Nizam’s Government and printed at Oxford University Press in 1947.

The work done by him on the preservation of monuments and exploration and excavation of relics of ancient civilization, particularly Ellora, Ajanta and Bidar, was well received not only in India but also in Europe and the United States of America, Dr. Yazdani wrote several books. He wrote about eight volumes on the work of Ajanta and Ellora before and after excavation and preservation.Dr. Yazdani received several honours such as being elected a Fellow of the Royal Asiatic Society, a Member of the Bhandarkar Oriental Research Institute, and an Honorary Fellow of Islamic Research Association, Bombay. He was involved with Osmania University right since its inception. In 1936, he was conferred the title of “Officer of the Distinguished Order of the British Empire” (O.B.E.). He also received several honorary doctorates from several universities. Finally, in recognition of his glorious service to history and archaeology, the Government of India conferred the award of Padma Bhushan in 1959.Dr. Yazdani was also a mentor to the next generation of scholars who worked on the Deccan, such as Haroon Khan Sherwani. Dr. Sherwani is best known for his two volume work co-edited with Purushottam Mahadev Joshi (Director, Bombay Archives) called History of Medieval Deccan.Sherwani and Joshi mentored the whole next generation of Deccan scholars, including A.R. Kulkarni, Teutonico R. D'Souza, and M.A. Nayeem, all of whom can be thought of as being in the intellectual lineage of Ghulam Yazdani.

Later life:
He died on 13 November 1962. Unfortunately, his contributions have never been celebrated by the Archaeological Survey of India, or by the state archaeology departments of Andhra Pradesh, Telangana, Maharashtra and Karnataka.

Indeed a very good read about a great man with such a fabulous career! History and archaeology and people related have always been neglected in our country! Salute!

new generation salute him for his contribution

Thanks for sharing this knowledge with me .

i have his book, & also Sherwani's, great source of south Indian history.

Remarkable story, a great scholar and patriot, deserves to be recognized and appreciated.

BHARAT RATNA, he won't be conferred even Padma Shri, when it is given to Saif Ali Khan..because he doesn't seem to have any political connection (posthumous..next to impossible)