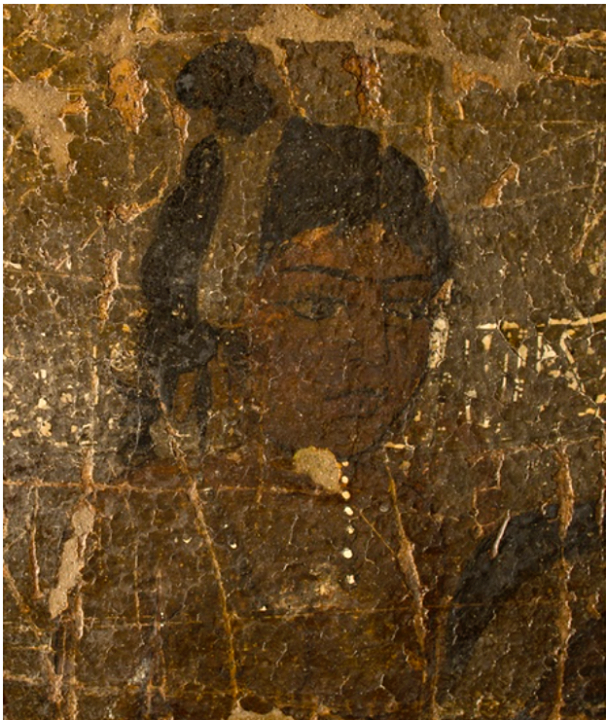 Article:
The Ajanta cave murals: 'nothing less than the birth of Indian art'.
By William Dalrymple
The Guardian

The paintings are possibly the finest surviving picture galleries from the ancient world. Now, the oldest in two of the caves – hidden for decades – have been painstakingly restored to reveal their true beauty.

In the early summer of 1819, a British hunting party was heading through thick jungle near Aurangabad, in Maharashtra, western India, when the tiger they were tracking disappeared into a deep ravine. Leading the hunters was Captain John Smith, a young cavalry officer from Madras. Beckoning his friends to follow, he tracked the animal down a semi-circular scarp of steep basalt, and hopped across the rocky bed of the Wagora river, then made his way up through the bushes at the far side of the amphitheatre of cliffs. Halfway up, Smith stopped in his tracks. The footprints led straight past an opening in the rock face. But the cavity was clearly not a natural cave or a river-cut grotto. Instead, despite the long grass, the all-encroaching creepers and thorny undergrowth, Smith was looking at a manmade facade cut straight into the rockface. The jagged slope had been painstakingly carved away into a perfect portico. It was clearly a work of great sophistication. Equally clearly, it had been abandoned for centuries.

A few minutes later, the party made their way gingerly inside, as Smith held aloft a torch of burning dried grass and his companions clutched their muskets. A long hall led straight into the rock, flanked on either side by 39 octagonal pillars. At the end rose the circular dome of a perfect Buddhist stupa carved, like everything else, out of the slope of the mountain.

All over the walls, the officers could see through the gloom the shadowy outlines of ancient murals. On the pillars were figures of orange- and yellow-robed monks with green haloes standing on blue lotuses, while on the rock walls facing on to the side aisles were long panels of painting filled with elaborate crowd scenes, rather as if a painted scroll had been rolled out along the wall of the apse. In the light of the flickering flame the officers crunched over a human skeleton and other debris dragged into the cave by generations of predators and scavengers. The party advanced until they reached a pillar at the far end of the hall, next to the stupa. There Smith got out his hunting knife and inscribed over the body of a Bodhisattva (a previous incarnation of the Buddha) the words: "John Smith, 28th cavalry, 28 April 1819."

u mean he vandalised the statue.

like initials in Vatican carved on Raphael School of Athens: VIVA VIRGILIO