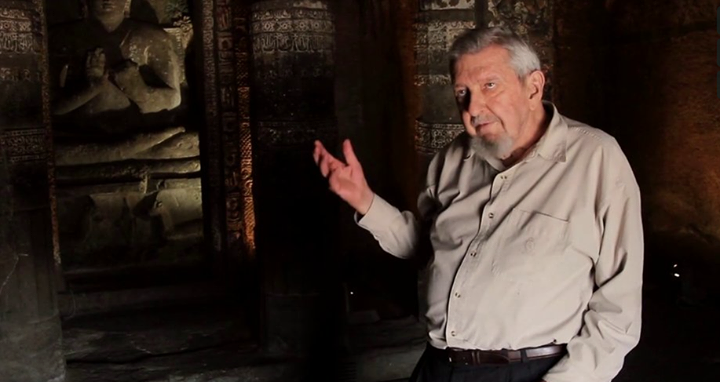 Walter M. Spink, Professor Emeritus, History of Art, at the University of Michigan, Ann Arbor. He has published widely on Indian Art in general, and Ajanta and related sites in particular and continues to travel, lecture, and work at the Ajanta Cave site.

as published in University of Michigan News

WHEN UNIVERSITY OF MICHIGAN art historian Walter M. Spink was named professor emeritus in fall, 2000, he was off in a remote district of India, continuing his work on the project that has captivated him for over fifty years. The world's authority on the Buddhist rock-cut cave monasteries near Ajanta, Spink, like innumerable Buddhist pilgrims had returned to this site regularly with zeal and dedication. Moreover, he has enabled hundreds of students, not only from the University of Michigan, but also from institutions around the world, particularly those in India, to participate in his site seminar.

The thirty caves at Ajanta are actually human-made excavations cut into a horeshoe-shaped scarp of a steep cliff overlooking the Wagora River in the state of Maharashtra. Built in two separate phases, they represent two distinct movements in Buddhism, the first six caves dating from approximately the first century B.C.E. and the others from the fifth century C.E. All the caves reflect the Indian genius for sculpture, imitating contemporary royal and religious structures made of wood and thatch. Covered with elaborate decorative details, many also contain remnants of paintings that document material aspects of life in fifth century India, such as clothing, textiles, furniture, musical instruments and cooking utensils.

IN THE COURSE OF HIS RESEARCH, Spink has developed a controversial theory that all of the later caves were completed within only fifteen years . From roughly 462 to 477 C.E., he maintains, the site experienced a sudden burst of pious patronage from rival dynasties that resulted in intense but uneven development. After the original patron died in 477, new donors hastily added intrusive carvings in any available space to gain religious merit, thus distorting the original scheme. In documenting evidence to support his ideas, Spink has painstakingly compared iconographic and architectural details from the porches, doorways, walls, pillars, etc. of all of the later caves.

The complexity of the site, along with Spink's enthusiasm for sharing his love of Indian art with others, spurred him to find a way to take students there. Since the early 70s, he has organized a site seminar that attracts students from around the world. The seminar format has varied somewhat over the years, ranging from one to two weeks of all-day sessions devoted to what Spink calls "guided investigations" that challenge the students to reconstruct the sequence of various elements in the caves. After a morning to explore a specific cave, the group discusses what they've seen and concluded. For example, last summer one of the assignments directed the students to scrutinize Cave 19 as follows:

Symmetry is virtually the 'rule' in India's architectural forms, and this facade - as originally conceived - is no exception. However, it has been 'violated' by intrusive (even if often beautiful) votive images, placed upon and around it ... at the moment of the site's decline in 479-490. Your task is to figure out which of the many images belong to the original phase of the work ... and which are later intrusions. Look carefully. And think carefully. Justify your opinions by not only considering the placement of the later images (sometimes quite inappropriate with regard to the earlier plans), but by reference to the many significant iconographic changes .... Do not think that this will all fall into place easily! But you will learn a lot, by looking and thinking intensely and getting used to the fact that your initial judgments are so often wrong.

He reminds me of great sages of ancient era! Pranam.

Thank you for this series on Ajanta!

Walter Ji, my most beloved professor!

one of the most powerful Historian At Ajanta Caves.

I had seen these caves in full moon day,in nights in early 70's they r magnificent. Great work of human creative labour.