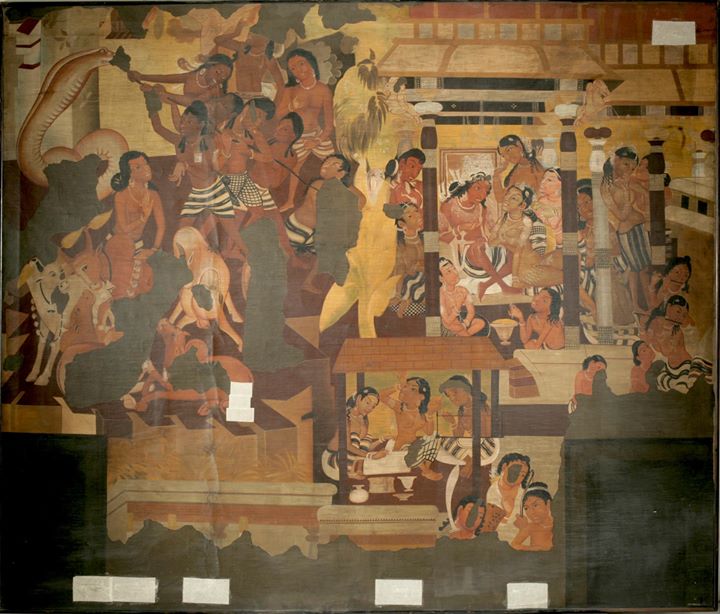 This is a copy of a painting in cave 1 at Ajanta. The white patches cover fragile areas that require conservation work. The Ajanta cave paintings are the oldest surviving examples of painting in India. They date from the 1st century BC to about AD 480 and depict stories from the lives of the Buddha (the Jatakas). This one depicts scenes from the Janaka Jataka and the Sankhapala Jataka.

The cave complex was discovered in 1819 and attempts were made to document the paintings inside them. In 1844 Major Robert Gill was commissioned to make copies. Most of the 30 or so paintings he completed were displayed at the Crystal Palace in Sydenham, south London. Unfortunately they were destroyed in a fire there in 1866. This painting is one of only four surviving examples in the V&A.

In the top left hand corner is a group of men pulling a large snake. In front of the snake, there is a man with a group of oxen.

To the right of this is a scene set in a palace setting in which a raja and rani sit surrounded by attendants. The palace is denoted by an elegant roof supported by decorated pillars. Below them is an inner apartment denoted by a simple roof structure supported by simple pillars. Within the inner apartment one woman rolls out something on a flat board and is surrounded by pots and a variety of vessels, while another woman prepares cotton thread (or are they all preparing cotton?). On the bottom left and right hand corners are the black rectangular outlines of the doorways inside the actual caves which lead to the monk's cells.

Commissioned by the Government of India between 1844-1863 and deposited in the India Museum, London.

Historical significance: The paintings inside the Ajanta caves tell stories from the lives of the Buddha. The main part of this painting depicts scenes from the Janaka jataka. The narrative continues onto painting IS.53-1885.

Narrative:
King Janaka of Videha is seen sitting in his palace with his wife. He announces to her that he intends to renounce his worldly life. Scene depicted in the centre of IS.55-1885.

In order to persuade him against this course she organises a music and dance performance. Scene depicted in left hand side of IS.53-1885.

Despite the pleasure of viewing the dancers, the king confirms his decision to live alone. According to Schlingloff, he is persuaded to do this by the sight of women preparing cotton as the two bangles that one of them is wearing clash together and resound, whereas the single bangle of the other women remains silent. Scene depicted in bottom centre of IS.55-1885.

The king renounces his kingdom and rides out through the city gates on his elephant, accompanied by a retinue which includes his son. Scene depicted in the centre of IS.53-1885.

Once they have left the city the king and his retinue visit a hermit in the mountains and listen to his sermons. Here the hermit reassures him that only a life of solitude can lead to salvation. Scene depicted in the top right hand corner of IS.53-1885

In the top left hand corner is a scene from the Sankhapala jataka.
A Bodhisattva, having witnessed the splendour of the Naga king wished to be reborn into the Naga kingdom. In his next birth he was born as the Naga king Sankhapala. He soon grew weary of the good life and as a penance for his desires he lay on an ant hill and offered his body to passers by.

A party of men found him, they tied a rope around him and as they dragged him along Sanhkapala did not resist. A kind-hearted cattle dealer who saw what was happening and offered the men some of his cows in exchange for the serpent. Scene depicted in top left hand corner. The grateful Sankhapala took the cattle dealer to his splendid palace under the lotus-lake where he stayed for a year after which he decided to become an ascetic.

Irony is we know the name of painter who copied the painting, but not of the original painter (s) :-)

There are no authentic images of Babar or other kings just 600 to 800 back in time As mush as Buddha & Mahaveer of 600 BC had drawn or sculpted images after 800 years and that too heavily influenced by art forms of the day, Unlikely to be true-authentic representations ...

Paintings of Ajanta learn a visual lesson of self sacrifices, morality, honesty, and other known informative values