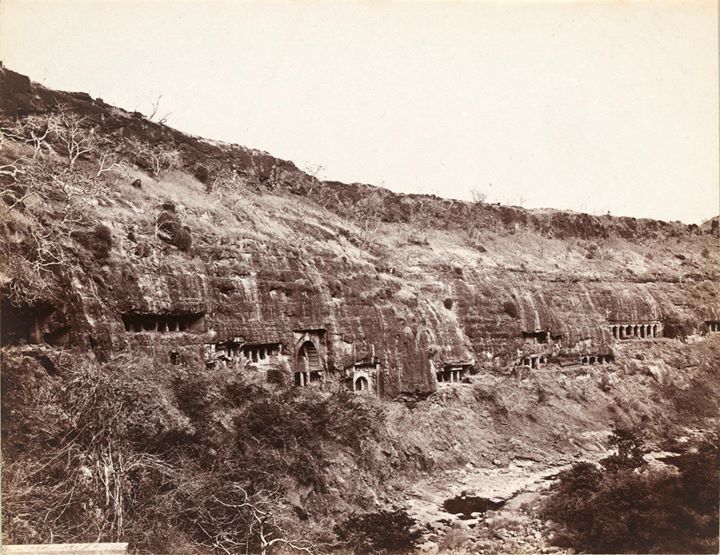 The ancient abbey of Ajanta -

LIKE the curves and columns of some great organ runs the line of stone arches and colonnades along the hillside that faces to the sunrise in the glen of Ajanta. Twenty-six caves there are in all, making one long level line, overhung by the rounded ridge of dark-blue stone that was undoubtedly chipped into shape and bareness long long ago to emphasize that balanced uniformity which gives to this ancient abbey so much of its solemnity and beauty. As we first see the caves, from the boulder-strewn stream some hundreds of feet away, they appear like a succession of pillared verandahs, broken once near the middle, and culminating in the distance in the tall arched fronts of great chaitya halls. It is thus that we first become aware of Caves Ten and Twenty-six, and are affected by their severity and regularity as if by music. In reality, Nine and Nineteen are also chaityas. But both are slightly masked by masses of rock, and only Ten and Twenty-six stand out in this first view. How lonely and remote is this glen in which we find them ! It lies crescent-shaped among its hills, so that the view from each monastery-cave seems closed upon itself. The torrent that runs through it enters, as a great cascade, at the northern end, and leaves this rocky ravine without giving a hint of a world without, where twistings and windings are to bring it to a wider stream. Such are the sites that have ever seemed ideal to the monk. The murmur of running waters and the voices of the waterfalls make to his ear a perpetual plain-song, in unison with the intoning of ancient psalters and the chanting of texts. In the circling path of the sunlight measured against the green, its first rays at dawn and its last at cowdust, are signals for ringing of bells and lighting of lamps, for processions, and incense, and sprinkling of holy water. The quivering of leaves through the tropical day speaks of coolness and shadow, the environment of learning ; and the solitude of nature promises remoteness from the world, the only possible environment of holiness. Such must Ajanta have seemed to the handful of monks who took up their abode in its natural caverns, perhaps a couple of centuries before Asoka. The rough path by which they could climb to their eagle's nests of dwellings was soon hewn by their patient hands into simple stairs. But even these were reached, from the north, only after arduous travel over the boulders by the stream side. A perfect site for a monastery. It is difficult to imagine that amongst the scarped and rugged hillsides of Khandesh there could have been found another vale at once so lonely and so beautiful.

Wow! The colored plates are by Nandlal Bose! Where can one get this book ? :)

The text is nothing to write home about though, peculiar mixture of admiration, ignorance, preconceived notions and a 'western' eye. No doubt she did her best. ( Disclaimer: Just did a quick flip through)

None available even on AbeBooks. : (