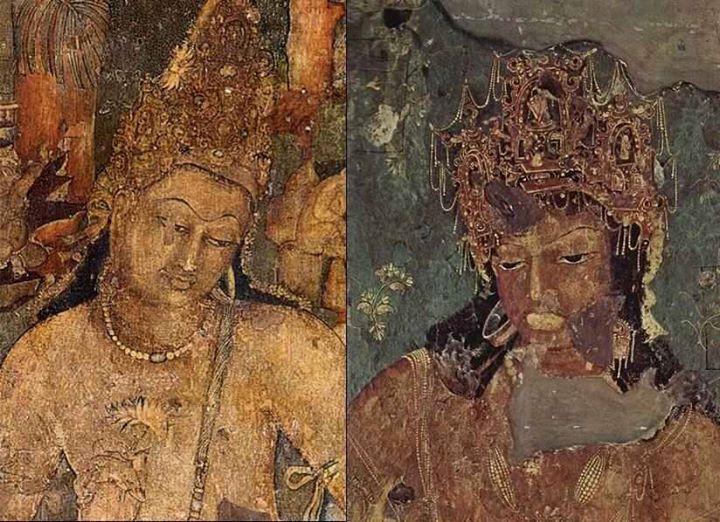 Article:
How the Ajanta murals were created
By Aishwarya Pramod
The Magic Tours of India Blog

The Ajanta cave paintings (from around 200 BCE to 500 CE) represent India's art at a great height of sophistication and skill. These scenes of the life of Buddha and the bodhisattvas, natural beauty and royal splendour have been called "the birth of Indian art".

Here are some of the ingenious methods that Indian painters used to create paintings that enthrall us to this day.

Methods of lighting up a dark cave to paint in:
Painters used many methods to light up the interiors of dark caves they had to paint. Apart from using torches lit with vegetable oil, they positioned large metal mirrors to angle sunshine. They poured water into shallow depressions they had made on the floor, to reflect sunlight onto the ceilings of the caves. They would also whitewash the walls of the caves with lime plaster before painting them, which would create a natural halo of light that would help them with their paintings.

The plaster base that enables the painting:
The painters covered the cave walls with two layers of plaster made of mud, vegetable fibre, paddy husk, rock-grit, sand, etc. The plaster was then covered with a thin coat of lime. Then they made their drawings on this.

Materials used to make paints and brushes:
Six pigments were used by the painters. They were mixed with water to create paints.
Yellow ochre (from a natural earth pigment containing hydrated iron oxide)
Red ochre (the same pigment with a large amount of hematite in it)
Blue (from crushed lapis lazuli)
Green (from glauconite or 'green sand')
White (from kaolin, lime or gypsum)
Black (from lamp-black, the soot left over from oil lamps
The brushes used for different types of effects:
They used several types of brushes, of different materials. One brush was a pointed rod made of khachora-root mixed with boiled rice. Another was a thin bamboo rod topped with a cotton swab. A third was made from the soft ear hair of a calf, and fixed with lac. Hair from a squirrel's tail and a sheep's belly was also used.

Source:
The Magic Tours of India
If you are tired of cookie-cutter tours and want something insightful and interesting, try this tour company in India:
http://bit.ly/1QOyDSV

Digital Rare Book: The Vishnudharmottara - A Treatise on Indian Painting and Image-Making By Stella Kramrisch Lecturer in Fine Arts (Department of Ancient Indian History and Culture), Calcutta University Published by Calcutta University Press - 1928 Read Book Online: http://bit.ly/1GBLyWc Download pdf Book: http://bit.ly/1z8FXyR Introduction: The Vishnudharmottara is a Supplement or Appendix to the Vishnupurana. Part III of the Vishnudharmottara gives the fullest account hitherto known) of the various branches, methods and ideals of Indian painting. It deals not only with its religious aspect but also, and to a far greater extent, with its secular employment. It proclaims the joy that colours and forms and the representation of things seen and imagined produce. Speaking of artistic representation in relation to religion, it points out their mutual limitations : " Vajra said - The Supreme Deity has been described as devoid of form, smell and emotion and destitute of sound and touch so how this form can be (made) of Him ? Markandeya replied Prakrti and Vikrti (come into existence) through the (variation in) the form of the Supreme Soul. That form of Him (which is) scarcely to be perceived is called Prakrti. The whole universe should be known as the Vikrti (i.e,., modification) of Him, when endowed with form. Worship and meditation (of the Supreme Being) are possible (only when He is) endowed with form... The best position of the (Supreme) Soul (however) is to be imagined without form. For seeing the worlds (He) possesses eyes closed in meditation..." This concession being made, life in its entirety becomes fit for artistic representation', and the realm of imagination is as close within the reach of the artists, as nature that surrounds him, for tradition guides him in the one case and observation checks and inspires him ini the other. The Vishnudharmottara admits in several places, that it is but repeating and compiling from older sources. These being lost to us, our text represents the earliest exhaustive account of the theory of painting. Its date can be ascertained partly from chapters being copied from earlier sources, and partly from a custom of setting up statues to renowned personages with which the text deals.

A must see place in India.

The soft ear hair of a calf brush. I love it. Thanks for sharing Amrita

Magic Tours of India Welcome to Aurangabad Magic, the best way to explore Aurangabad and surrounds. What to see in Aurangabad: Ancient Indian sites: The Deccan region has been inhabited since the Early Bronze Age. In the 3rd century BC, during the reign of the Mauryan Emperor Ashoka, Buddhism made its appearance in the Deccan. From the 2nd century BC onwards, cave excavations began in the area, resulting not only in the glorious World Heritage sites of Ajanta and Ellora, but also in hundreds of other caves. You can begin your exploration with a visit to Ajanta (3rd century BC to 6th century AD) and Ellora (6th century AD to 13th century AD). While Ajanta is Buddhist, Ellora is home to multiple religions – Buddhism, Jainism and Hinduism. Medieval Indian sites (8th to 18th century): In the 12th century AD, the Hindu Yadavas built a strong fortification at Deogiri. Deogiri fell to the Muslim Delhi Sultanate – first to the Khiljis and then to the Tughlaks. Mohammed bin Tughlak renamed it Daulatabad in 1327. The fortress of Daulatabad is known for its intelligent design and is perhaps the most impressive defensive fortification in India. Apart from Daulatabad, you should drive through the city of Aurangabad to see some of its famous gates, visit the Bibi ka Makbara, and Panchakki. If you are spending more than a couple of days in Aurangabad, you can also visit the 17th century temple at Grishneshwar, the Aurangabad Caves, and the tombs at Khuldabad. Longer road trips in Maharashtra: Aurangabad can be combined into longer itineraries with Nashik, Shirdi, Pune and Mumbai. You can also add other places in Maharashtra - hill stations in the Western Ghats, beach resorts, sea forts and so on. How to book a tour: Please review the tours listed on the menu and see what interests you. To book a tour, please write to deepa@magictoursofindia.com or call Deepa at +91 9867707414. http://bit.ly/1QOyDSV

I have been in Ajanta but why there in small island far from the mainland?Could u find the reason and let us know!

If one really looks at the hair cut, head gears, Jwellers designs and dress designing of those times, one will be able to understand from where we get these modern ideas!!

the unique pc is a checkered shirt similar to modern shirt with different size of checks on right and left side of the shirt. Each painting has a story which one can read by facial expression and body language of the correctors in the paintings.

Crushed Lapis Lazuli can be mixed with water for giving out a blue hue...thanks for all the information. It was most interesting for me.