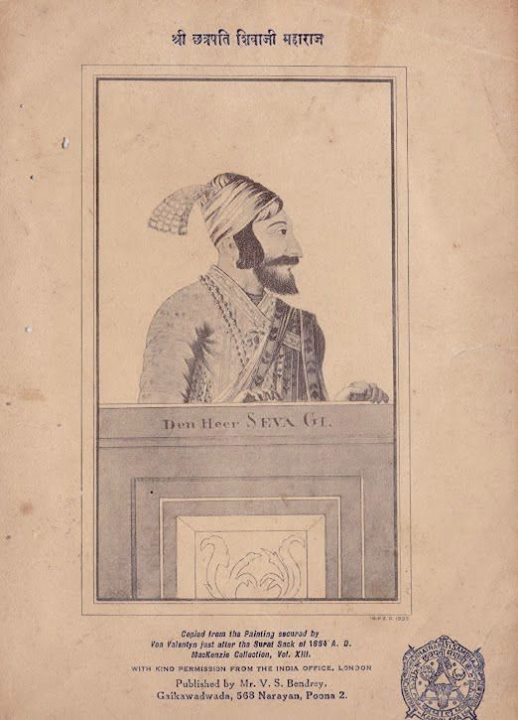 Book Excerpt:
Several distinguished Europeans had interviews with Shivaji, but they were too much engrossed in their immediate concerns. Though they had golden opportunities of talking with Shivaji and closely observing him, yet they did not leave any detailed account of his personality. Stephen Ustick went as an ambassador of the English from Bombay, in 1672, Thomas Niccolls in 1673, II. Oxenden in 1674, Samuell Austin, R. Jones and Edw. Austen in 1675, Lieut. Adames and Mr. Mauleverer in 1676, and John Child in 1678. Each of these envoys had interviews with the Raja. Similarly, the chief of the Dutch Factory at Teganapatam carried rich presents to Shivaji in a pompous procession and secured an interview with him in July 1677. The French envoy Sieur Germain from Pondichery visited the Raja on the bank of the Coleroon river in the same month. It is a pity that no sketch of his person is available from these envoys.

Shivaji is described by Escaliot on the evidence of those who had seen him, to be of medium stature and of excellent proportion. He was active in exercise, possessed quick and piercing eyes, and was whiter than any of his people. He seemed to smile whenever he spoke. His was a light weight of 140 Ibs English or at most 160 Ibs Dutch at the time of his coronation in June 1674 at the age of 44 years.

According to Thevenot, Shivaji was small in stature and tawny in complexion. " His eyes are very sharp and fiery, showing a great deal of intelligence. He usually takes one meal a day, and is quite healthy.*'

One Dutch envoy Abraham Lefeper visited Sh. at Rairi in 1672, Father P. J. d'Orleans describes him as 'a little lively, restless man, but with all his impatience he wanted neither decision nor manly bearing.'

Cosmo Da Guarda has fully confirmed the preceding remarks. He was not only quick in action but lively in carriage also, for with a clear and fair face, nature had given him the greatest perfections, specially the dark big eyes were so lively that they seemed to dart rays of fire. To these was added a quick, clear and acute intelligence."

Image:
Painting of Shivaji Maharaj by Valentyn 1656-1668.
The true likeness of Chattrapati Shivaji Maharaj released to the public at large in Pune on Shivjayanti in Shivāji Mandir 1933. The document was released by historian V.S. Bendrey under the auspices of Shaityacharya Na Chi Kelkar.