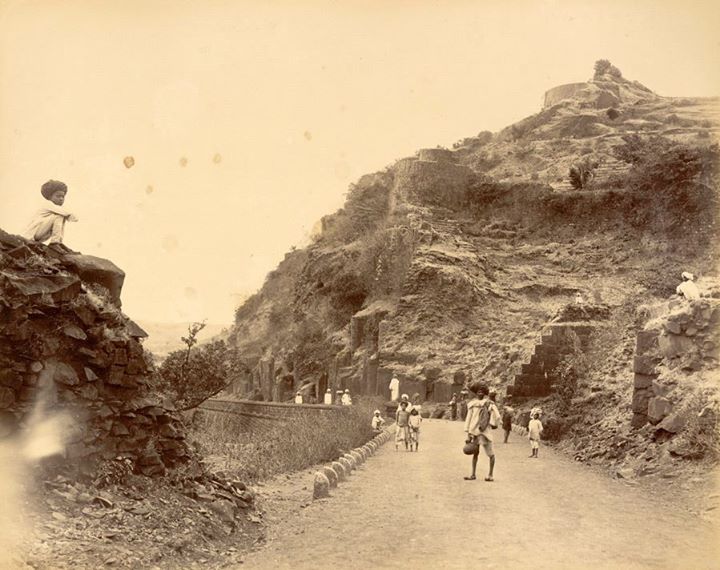 The true national history will record the seventeenth century as the most important period of great social, as well as political, upheaval in Maharast,ra. The policy adopted by the State is reflected in the actions of it officers, and the data so far recorded in regard to the life and doings of Kesavabhata afford ample contemporary evidence to show how this upheaval was brought about.A review of the condition of the people of his times will, no doubt, prove interesting and thought-provoking. Aindryabhiseka performed by Sivaji is clearly indicative of the idea with which he lifted the masses to the higher level of the society and worked up the building of the Hindavi Swarajya in the Deccan.

Image:
Road scene on a hillside, Panhala, from the Lee-Warner Collection: 'Souvenirs of Kolhapur. Installation of H.H. the Maharajah, 1894' taken by an unknown photographer in 1894. Panhala is situated in the Sahyadri hills about 12 miles north-west of Kolhapur in Maharashtra, western India. The Panhala fort was probably founded by King Raja Bhoja between 1192 and 1209. Panhala was one of the most important hill forts in the area and over the years had been in the possession of several different rulers.

Yep! There it is, the famous bow-legged stance. I wonder if anyone has done a study of bow-leggedness in India. There seems to be a lot of it in Maharashtra.

Could easily be a vitamin deficiency...