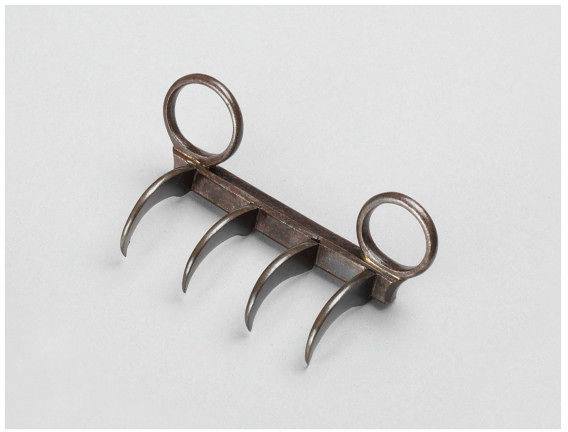 Digital Rare Book:
Deliverance or the escape of Shivaji the Great from Agra
By Rao Saheb G.K. alias Babasaheb Deshpande
Of the Clan Vishwamitra
Published by The Author, Poona - 1929

This weapon is reputed to be the one used by the Maratha leader Shivaji to kill Afzal Khan, the Mughal commander of the opposing Bijapur army in a famous episode that took place during the complicated political upheavals of 17th century India. During a protracted military engagement in 1659, the two men arranged a truce in order to meet in a tented enclosure, virtually alone. Both came armed: Shivaji wore mail under his clothes and metal skull protection under his turban. He also held metal "tiger claws" of this kind concealed in his hand. The two men fought and Shivaji disembowelled his opponent.

The claws are accompanied by a fitted case that is inscribed: "The 'Wagnuck' of Sivajee With Which He Killed the Moghul General. This Relic was given to Mr. James Grant-Duff of Eden. When he was Resident at Satara By the Prime Minister of the Peshwa of the Marathas".

Was he a bijapuri or a mughal ? Cant be both.

The 'Wagnuck' is the anglicised name for 'Bagh-Nakh'(Hindi:'बघ-नख') or 'Bagh-Nakha'(Hindi:'बघ-नखा''), literally meaning Tiger's (Bagh) Nails (Nakh). It has remained a popular and highly effective 'close-combat' weapon that was worn as rings on the index & small fingers, with its sharp nails concealed inside the fist or below the palm.

This is an awesome post. We r thrilled to see the weapon!

Call it a clan, call it a network, call it a tribe, call it a family. Whatever you call it, whoever you are, you need one.

Where is this weapon now?

At Victoria & Albert museum in London.

Everything precious seems to have gone there. :(