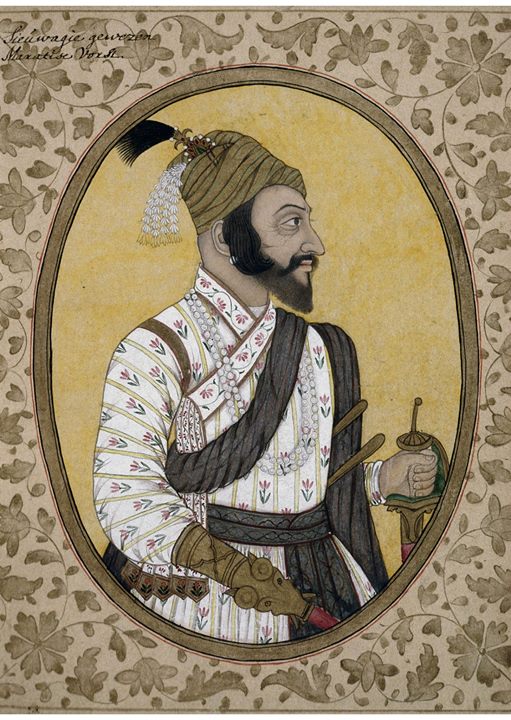 " If any portion of history merits more attention than others, it should seem that a period of a revolution in the State or the progress of the foundation of a new one demand the strictest investigation. Shivaji was the founder of the Mahratta Dominion, in the peninsula of India, and hitherto we have no account, either sufficiently accurate or sufficiently connected to follow his life. "

The factoy records are the early records of the proceedings of the East India Company's Agents and Factors in the East in their endeavours to establish factories and promote the trade of the English. These records chiefly consist of Diaries and consultations of the Council, copies of letters sent and received, and stray diaries and letterbooks of particular individuals.

Here we are publishing for the first time more than a thousand extracts from the letters and dispatches of contemporaries of Shivaji bearing on matters dealing with the life and work of Shivaji. The writers are writing about things which they had occasion to know personally or about things which they heard and they reported these because it was their business to do so. We have tried to preserve the old spelling and punctuation. In this record have been preserved also all the adjectives heaped from time to time on Shivaji so that students of history may be in a position to trace the several stages in contemporary public opinion between the "rebel" Shivaji and the crowned king.

Since these correspondents are narrating what they personally saw or heard when the things reported were actually happening round them we need not hereafter rely in order to present a sufficiently accurate and sufficiently connected account of such matters as are included herein on Chronicles Marathi or Mahomedan. Most of the Chronicles were written long after the events they record and are utterly lacking in historical perspective, are dominated by the idea of the miraculous and do not attempt at achieving accuracy either in fixing dates or in narrating incidents. They are also mostly vitiated by bias. Some of the papers which are printed here are nothing less than the letters and correspondence of the actors themselves or of those who were in immediate contact with them written at the time when the events reported were happening or as a part of the incidents themselves. This is first class material and anything else said or written subsequently from reports heard must rank lower. The writers of several letters are often times reporting things which they have only heard but these are contemporary reports and while appraising them as such they must have precedence over reports which have been subsequently collected.

The letters which are published here, were mostly exchanged between the parties in strict confidence in the course of and as a part of their regular work. The correspondents had not the slighest idea that their writings would ever be studied as materials for writing Maratha history. So at the time of writing these letters there was not present to the writer's mind any idea of writing for effect or for posterity. These letters were simple business letters in which a few facts are recorded as and when they occurred with such expression of opinion as is usually to be found when one partner of a firm writes to another partner who is at some distance, or the agents of a firm write to the head office and try to give them a true picture of the situation with which they have to deal. They had also to report such news as they heard in the course of their business so as to keep one another and also the head office well informed. But this they frankly stated to be news and nothing more.

Inscription Comment:
The inscription identifies the subject and probably means: 'this was Shivaji, founder of the Maratha state.'

Firstly we need to sort out his birth date, the government & shivsena celebrate his birthday more than a month apart.pathetic .A standing & glaring joke. He definetly dose not deserve this in his own land.

One of the most fierce warrior and respected King of medieval time in India who had guts to take both the Mughals as well as Britishers Head on!!

My hero. I am his ardent admirer. He is etched in my memory as the one and only real leader who had all the qualities of a good man, son, brother, leader et al. SS will do well to emulate him rather than indulge in activities that will shame my Chatrapati.

Where can I get the book? I want to read it before my demise.

Any Indian should be proud of an Emperor like Shivaji Maharaj.I am of Tamil decent born and brought up in Mumbai(then Bombay).I shortened my surname to Dikshit From Dikshathar as we were called in Tamil Nadu(then Madras).I am a proud Maharashtrian.My mother of Tamil decent was also born in Bombay(Dadar West) in fact at home in the next building next to Plaza theatre known as Kanke Building which still exists