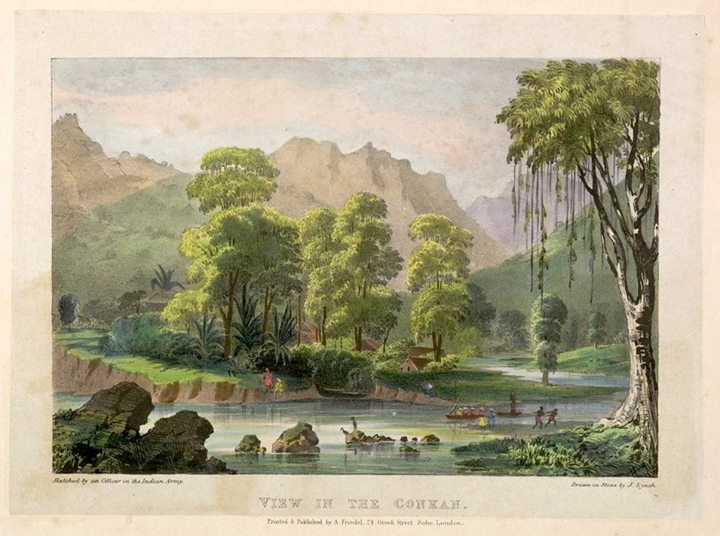 Coloured lithograph of a view in the Konkan by J.H. Lynch from a sketch by Baron Adam Friedel. Plate 5 from 'Eight Most Splendid Views of India, sketched by an Officer in the Indian Army' printed by Baron A. Friedel in London in 1833.

The Konkan is situatated between the Western Ghats and the Arabian Sea and extends from Gujarat in the north to Karnataka in the south. Thanks to the importance of sea trading along the Western coast of India, there are a number of forts located here. This view shows a river scene.

It is the same Jackson who was shot dead by a follower of Vināyak Dāmodar Sāvarkar and armed revolutionary activist Anant Kanhere, as he believed that 'these "good Topivallas" were really more dangerous than officers of the type of Dyer and O'Dwyer, for instance; for, it is the good popular government officials who reconcile Indians to foreign rule'! However, his murder created a trepidation even in the minds of several Indian freedom fighters and Marathi scholars, thinkers such as Durga Bhagvat as he was an inquisitive Sanskrit scholar and Indologst ! http://bombayhighcourt.nic.in/libweb/historicalcases/cases/Nasik_Conspiracy_Case_-1910.html

Thanks for this amazing information!