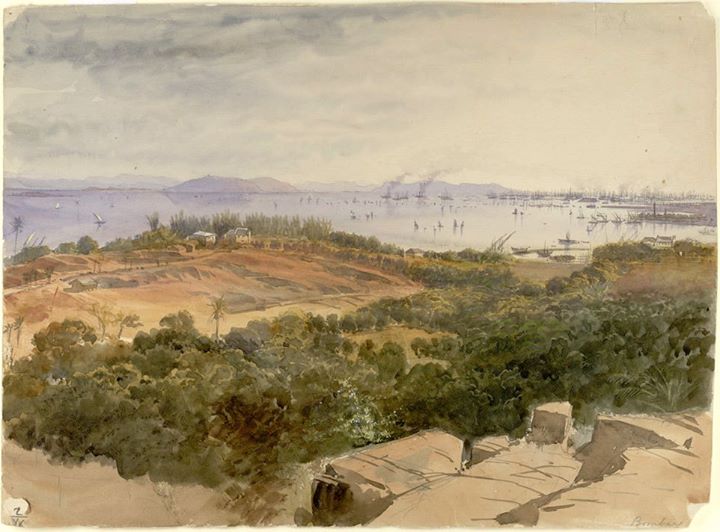 Water-colour painting of Mumbai Harbour by Nicholas Chevalier (1828-1902) in January 1870. Inscribed on the back in pencil is: 'Bombay.'

Originally, Mumbai (Bombay) was composed of seven islands separated by a marshy swamp. Its deep natural harbour led the Portuguese settlers of the 16th century to call it Bom Bahia (the Good Bay). The British Crown acquired the islands in 1661 when Catherine of Braganza married Charles II, as part of her marriage dowry. It was then presented to the East India Company in 1668. The second governor, Gerald Aungier, developed Bombay into a trading port and centre for commerce and inducements were offered to skilled workers and traders to move here. European merchants and shipbuilders from western India were encouraged to settle here and Mumbai soon became a bustling cosmopolitan town.

Many a times I try to visualize Bombay during the pre british times, and to give you an idea, just take a drive beyond mumbai (north) Boiser, palghar or beyond Alibag (south ) and then imagine that place as the pre british bombay. That's exactly it used to be wayyyyy back.

The Suez canal also contributed to its emergence as a commercial centre.