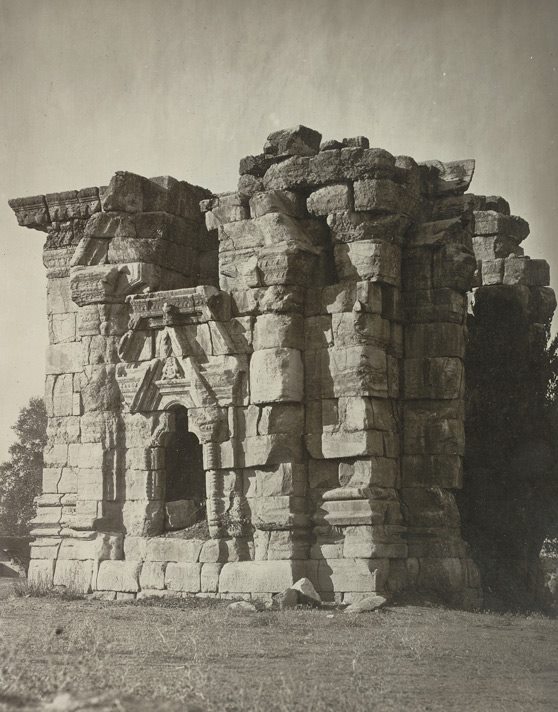 Temple of Sankaragaureswara near the village of Pathan. View from south-east. Probable date A.D. 883 to 901.

Photograph of the Sankaragaurishwara temple at Patan in Jammu and Kashmir taken by John Burke in 1868. This photograph is reproduced in Henry Hardy Cole's Archaeological Survey of India Report 'Illustrations of Ancient Buildings in Kashmir.' (1869) and the building therein described: 'The Temple of Sankara Gaureswara is elaborately carved, and some of the details are as sharp and clear as when first cut. The degree of elaboration in the porch-like projections and interior carvings...The repetition of the pediments one above the other, together with the highly decorated pillars in the porches, all prove that the style of building practised in Kashmir since the erection of the Jyeshteswara Temple, had in the progress of time followed the natural tendency for greater elaboration.' Modern Patan, located about 27 kms from Srinagar, is the site of Shankarapattana which was founded by Shankaravarman of Kashmir's Utpala dynasty (ruled 883-902) as his capital. By this time Kashmir had become a great centre of the Shaivite religion and philosophy. Like his predessor Avantivarman, Shankaravarman built two temples of which only the ruins remain, the Sankaragaurishwara Temple and the Sugandhesha Temple. Both dedicated to Shiva, they are seen as a late flowering of Kashmiri temple architecture. The former is named after the ruler and the latter is said to be named after his queen. They are built to much the same plan as earlier temples but their stones display a greater refinement and precision of cutting and carving.