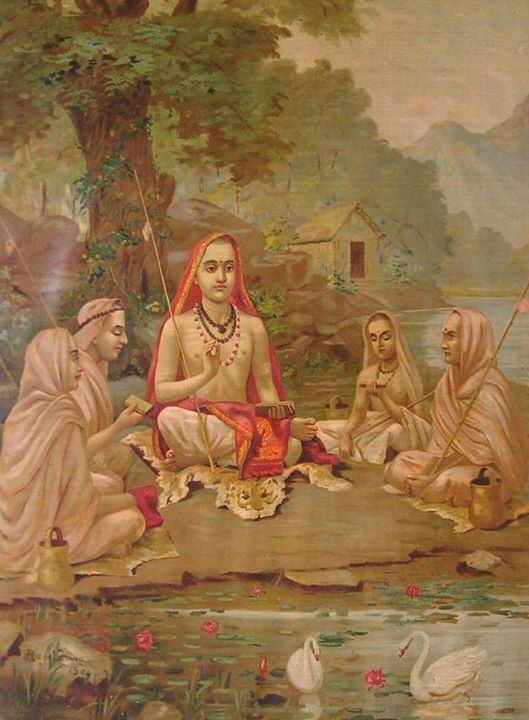 Article:
Why India Must Celebrate Shankara
By Suhas Mahesh

One of India's greatest philosophers, and a poet of the first order, Śankara is the personification of the distilled essence of Hindusim.

Primeval Hunter, Shiva!
Why wander here and there in search of game ?
The wilderness of my mind harbors many beasts
like pride, jealousy and lust;
Come, kill them, you’ll enjoy the sport.

People have been praying since forever for God to reside in their hearts, but it took Ādi Śankara’s pluck to suggest the offer as a favour to God! Śankara Jayantī was celebrated last week, and now is a good time to ruminate upon the ideas of this philosopher. Śankara is also a poet of the first order and reigns right up there with the greats of Sanskrit poetry.

But more importantly, Śankara is the personification of the distilled essence of Sanātana Dharma. His works are imbued with a healthy skepticism; his ideas draw upon human experience and not belief; he regards the study of holy books as neither necessary nor sufficient; he acknowledges the need for ritual, while warning of its limitations; he does not offer any one-size-fits-all straightjackets. In this world where people are regularly killed over perceived insults to holy books and men, Śankara shows a maturity that is almost alien to other religions (even to many Indian philosophers, for that matter). Let us take a look at a few verses from his Vivekacūḍāmaṇi “Crest Jewel of Wisdom”

By the then prevailing world convention, an acceptable response would have been to lop off blasphemer Śankara’s head. But we decided to instead raise him to the status of ācārya! This was nothing new really; Sanātana Dharma has always held the position that the purpose of the scripture is to transcend it. Even the Gīta does not hesitate to talk about the fallibility of the Veda:

Only the ignorant speak in flowery tongues,
extolling the Vedas, claiming
“There is nothing deeper than this.”

This sounds rather like something Richard Dawkins would say! Krishna continues:

There’s as well use for a well in a flood,
as for the Veda to a man of realisation.

This is a very refreshing freedom indeed; to question and pick out the truth for yourself. Even lesser known sects like the Cārvakas have lambasted the ritualistic methods of the Veda with impunity.

If the animal killed in the Jyotiṣṭoma sacrifice goes to heaven,
Why does the sacrificer not offer his own father?
The three authors of the Vedas were buffoons, knaves, and demons.
Just look at the nonsensical words of their pandits ‘jarbharī’, ‘turpharī’ !
(The two strange sounding words are from the Ṛg-saṃhita)

Quite a wry sense of humor, they had, these Cārvakas. And you can rest assured nobody gheraoed them demanding an unconditional apology! Their method was very much regarded a valid path of philosophical enquiry.

This article is courtesy of Nitin Ashok Bhagawat.

The figure at Badrinath is of Vishnu. Dumped by Buddhist ruler in nearby River Alaknanda it was recovered by Shri Sankaracharya with a damaged palm and installed, it is of black saligram stone, depicts Vishnu sitting in meditative posture. Shri Sankaracharya setup a centre to train Priest do proper Brahmanical Rituals , Kerala priest were brought and trained.and given 'Upadhi' as 'Namo - Badri -Pad' = "Namboodripad", authorised to do ritual puja in all Himalayan Temples.

Sri Bhavani Ashtakam by Bhagavatpada Jagadguru Adi Shankaracharya This is an extremely moving and melodious hymn to Ma Bhavani. Composer: Bhagvatpada Sri Adi Shankaracharya. Unlike a standard hymn, this hymn does not glorify the One worshipped. Instead, this hymn lists out, in each verse, the disqualifications of the worshipper. Each verse ends with the heart-breaking reminder to the worshipped and the One worshipped that there is no other refuge apart from the One, Bhavani. This hymn makes no effort to inform about the greatness of Bhavani in any manner. It makes no pretence to conceal Bhavani's greatness either, as by the very nature of the worshipper is Bhavani's greatness made known. The essence is that even if one is disqualified in all ways, a simple calling out to Bhavani is enough. The caller does not seek anything apart from refuge, while making it clear that he/she has nothing apart from disqualifications. This hymn is as indirect as it is direct. And in its very simplicity lies its depth and elegance. With no complicated words, this hymn is easy to learn and use. Text Source: http://bit.ly/1J6nlVG Listen to the Bhavani Ashtakam: http://bit.ly/1z9kRWr

Ask maneka ghandi what punishment to those who killed loins nd deskin them to sit upon to mediate.which religion is actual of Bhavni or hindutava.No hypocrasy plz.Some hyms sound same as muslims seek forgiveness from Lord of Lords.

Shafqat Sahab !No saint deskine any creature ever, to show some one sitting upon thus like skines was a symbol of supremacy & power, beyond it hunting was a profession in olden days & these things were provided by hunters to saints as a honour.

& one humble question more .....In this modern age why don't u put a question upon following hundreds of years old myths & principals which are non-practicle now a days.

U are prejudice towards religions, u have no right to put such questions....& for ur kind information Hindu is not any religion, it is a culture, a civilization ...the people lives along with Indus river & its plain were called Hindu by Arabs due to pronunciation diffirence. check the time difference of Shankar's & Islam, now think who imitate other

Historical records show that Sankar was instrumental for killing 40000 Hindus, Buddhist and Jain to spread Brahmanism. If such a person is great, then Bin Laden in not very bad!

If hinduism is not religion but indus culture then what about yug kalyug nd rebirth or surag nd narg .Who will judge nd by what yardstick .you seem to be confused or believe in confusion.Religion is essance of life nd hereafter is its reward or by reincarnationas per your mythology mr.om sharma.Avatars cannot need any loins skin for respect They donot preach for honour. I have good hindu frnds who believe that Manu was the actual incarnation of god on earth nd shiva was its manifestation.Brahminism started from sharda in kashmir.coment.

Mr. Shafqat Kakroo, pls clear Ur concepts before U say anything about the Hindu religion. Same goes for Ur Good Hindu Frnds ...

Shafqat,at least no non believer is stoned to death, the hands of those who commit blasphemy are not chopped off, a woman who is raped doesn't need 4 people to testify, people are free to live as believers and as non believers. In Santana Dharma believers are non believers and those with different ideologies coexist happily.

Adi Shankara is Universal Guru. Divinity of man and oneness of human existence is his teaching which is also the teaching of our Upanishads made easy for us by Sankara

If only we believed in the noble concept of Vasudhaiva Kutumbakam we would we blessed with peace and harmony. Reverence to Shri Adi Shankeracharya.