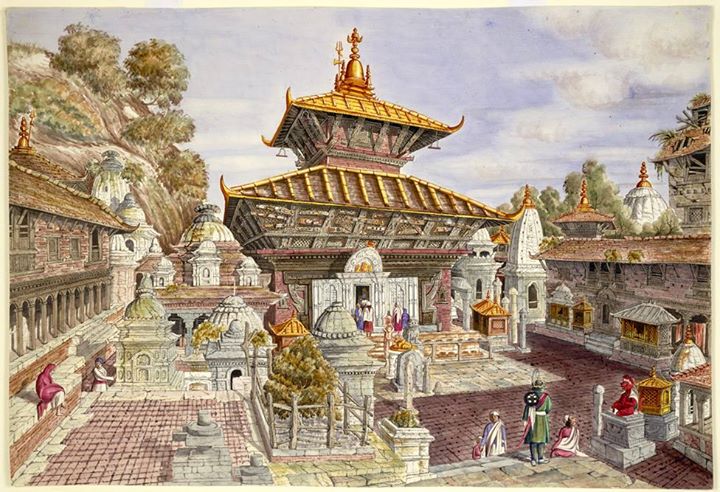 Temple of Mahadeo at Pasupati in Nepal -1856

The artist, Dr Oldfield, was Residency Surgeon at Khatmandu from 1850-1863. After his death his family published his two volume 'Sketches from Nipal, Historical and Descriptive...' (1880), which described life at the court of the Maharajah Jung Bahadur and also contained descriptions of religious monuments and architecture with illustrations from Oldfield's own drawings. The Pashupatinath temple, seen in this view, is dedicated to Shiva and is situated beside the Bagmati river. There has been a Shiva temple on this spot since before the 9th century and the present temple was built by King Bhupalendra Malla in 1653. The square two-tiered building stands on a single-tiered plinth in an open courtyard. The temple has silver-plated and gilt doors with niches on both sides containing images of gold painted guardian deities.

Hope,Pashupati temple of Lord Shiva is safe;earth quake is after 80 years .

My prayers to Lord Pashupatinath for the fast recovery of Nepal. For the departed Soules "OM SHANTHI, SHANTI, SHANTI!"

My humble prayers too to lord Pashupatinath for the safety of people of Nepal/India/Britain/Spain & other countries of the world.RIP to departed souls!!!Om Shanti!

not damaged in bhukamp. The great PASHUPATI TEMPLE.

Lord Shiva is Pralaya karaka means the one who causes pralaya. One who seeks him with devotion will be saved rest will be dust

It would be interesting to study the cross section of the building as a case of earthquake resistant design.

These beautiful paintings r only evidences of glorious history of Nepal for the coming generations.

Government should constitute an Expert Committee oF Architects , Engineers and Earth Quake Scientists to study the Structural And Foundation Details of this Great Temple and utilise the Techniques in Present Context for Future Development of Cities in Nepal and in India. Ar.Janaki rama murthy Swayampakula Janakiramamurthy

Very similar to the temples found in Kerala