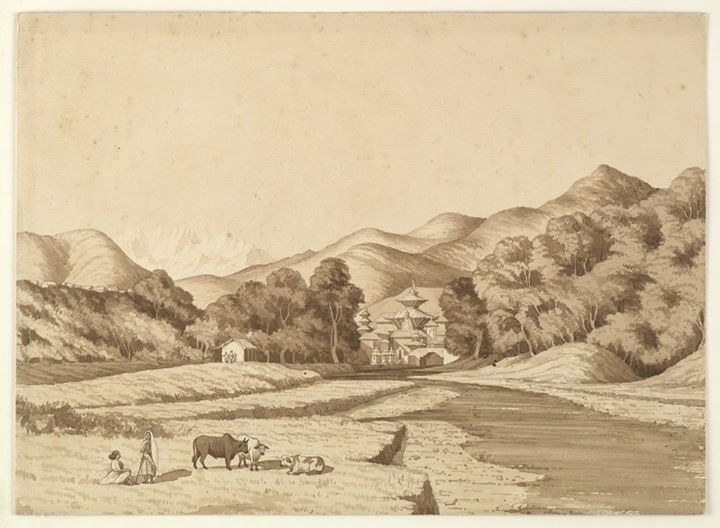 Temple at Pashupatinath in Nepal - 1853

Drawing of a Hindu temple at Pashupatinath in Nepal, by Henry Ambrose Oldfield (1822-1871), dated April 1853. The image is inscribed on the back in ink: 'Pushupatinath, Nepal April. 1853'; and in pencil; 'Mt Yhassa in distance.'

Dr Oldfield was Residency Surgeon at Kathmandu from 1850-1863. After his death his family published his two volume 'Sketches from Nipal, Historical and Descriptive...' (1880), which described life in the court of the Maharajah Jung Bahadur and also contained descriptions of Buddhist architecture, together with illustrations from Oldfield's own drawings. Referring to this image, he wrote: "The Baghmatti river, by having to flow through the narrow gorges at Gaokarran and Pashpatti, has its attendant valley divided into three distinct and different portions. It flows through a first distinctly defined valley between Baghdwar, where it leaves the Sheopuri Mountain, and the pass of Gaokarran. It flows through a second equally distinct valley in its course from Gaokarran to Pashpatti. Here it has the woods of Gaokarran and Pashpatti on its left and the high land on which are the temples of "Baddhnath" and "Dandeo" on its right bank. After emerging from the wood of Pashpatti, it flows through a third extensive and very circuitous plain before it finally leaves the Valley of Nipal."

The times to come again!