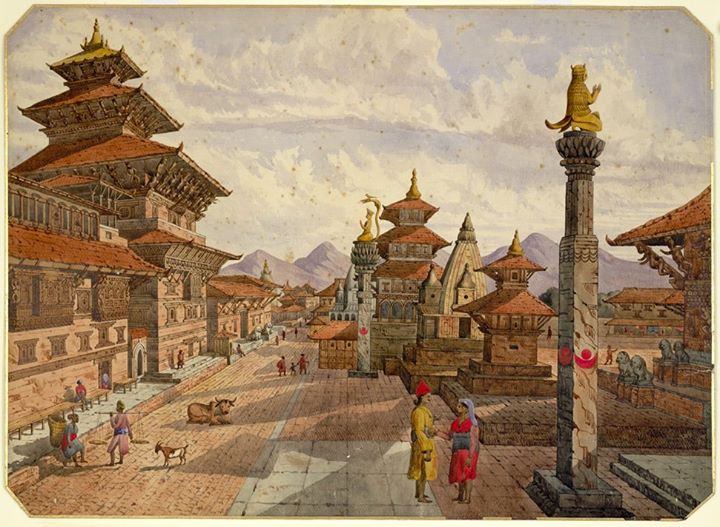 Lalitpur, the 'City of Beauty' was founded in the 2nd century by the Kirats and it remained a valley kingdom until the late 15th century when it became a sovereign state, together with Kathmandu and Bhaktapur. All three were built around Durbar Squares containing Palace and Temple complexes. This drawing is the original for the illustration facing page 96 of Volume I of Oldfield's 'Sketches from Nipal, Historical and Descriptive...' (1880), published by his family after his death. The two volumes contained an account of life at the court of Maharajah Jung Bahadur, together with descriptions of the religious monuments and architecture of the region with illustrations from Oldfield's own drawings. Of Lalitpur he wrote, "The darbar is situated in the centre of the city, and towards it numerous streets converge, more or less irregularly, from all those sites in the circle of the ancient walls where gateways formerly stood, and where some of them are standing at the present day...The darbar originally consisited of three sides of a quadrangle; the side facing to the north is now in ruins; that facing to the west was the principal front...[which] is still in very good preservation...The side of the darbar which faces to the south is now completely destroyed. The fourth or eastern side was open and formed part of a private garden to the palace."

This place will be in my memory for my whole life.

Saw this only two weeks back and was awestruck by its beauty....today it is nothing but rubble.....what a loss!

What a tragedy that it has been reduced to rubble. But the pain and sufferings of humans cannot be expressed!

Now most of it remains as a memory.