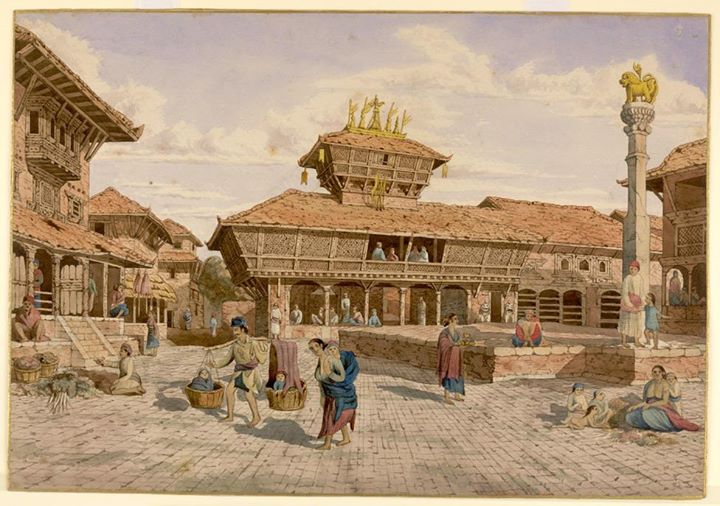 Temple of Bhimsen at Bhaktapur in Nepal - 1853

Watercolour of the Temple of Bhimsen at Bhaktapur in Nepal, by Henry Ambrose Oldfield (1822-1871), dated c.1853. This image is inscribed on the back in ink: 'No. 10. Temple of Bhimsun Bhatgaon'.

Bhaktapur, the 'City of Devotees' is 11 km east of Kathmandu and 10 km north-east of Patan and is the youngest of the three former city-states of the Kathmandu Valley. Bhaktapur was founded in the 9th century and rose to prominence under the Malla dynasty. It remained a valley kingdom until the late 15th century when it became a sovereign state, together with Kathmandu and Patan. All three have similar architecture and were built around Durbar Squares containing Palace and Temple complexes. The ground floor of the Bhimsen temple is open and the shrine is contained on the roof of the building. The artist, Dr.Oldfield, was Residency Surgeon at Kathmandu from 1850-1863. After his death his family published his two volume 'Sketches from Nipal, Historical and Descriptive...' (1880), which described life in the court of the Maharajah Jung Bahadur and also contained descriptions of Buddhist architecture, together with illustrations from Oldfield's own drawings.

Now it is partially destroyed by an earthquakr

sad to see the distruction

thanks for sharing. what a loss!

Beautiful. Sad if it may not have withstood the quake.

We feel the value of the painting and the book more than ever before.