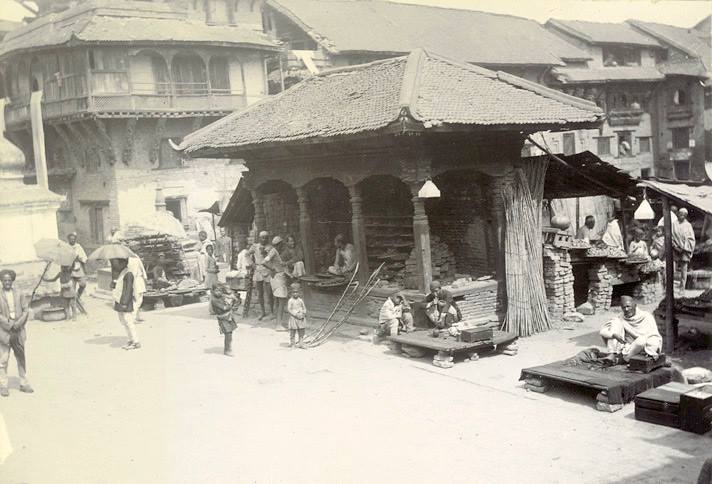 Photograph of a scene in Kathmandu, Nepal, from an album of 30 prints credited to Herzog and Higgins, taken in ca. 1901 and part of the Curzon Collection. Kathmandu, the capital of Nepal and its largest town, is situated on the Bagmati river. The town grew around the Himalayan trade route connecting India and Tibet and China, developing in the Lichchavi period (300-800 AD) of which little trace remains, but reaching its golden age in the period of the Malla dynasty between the 13th and 18th centuries. The town prospered with the taxes collected from the trade route and much of its grandest architecture dates from this time. In the centre of the city at the crossroads of the trade routes was a twelfth century large structure called the Kasthamandap or Hall of Wood, from which the city derived its name 'Kathmandu'. The old city of Kathmandu features clusters of temples, pavilions and monuments of wood and brick, typified by the structures in the image.

This mandap is no more!

Thanks for sharing the History of Kathmandu's.