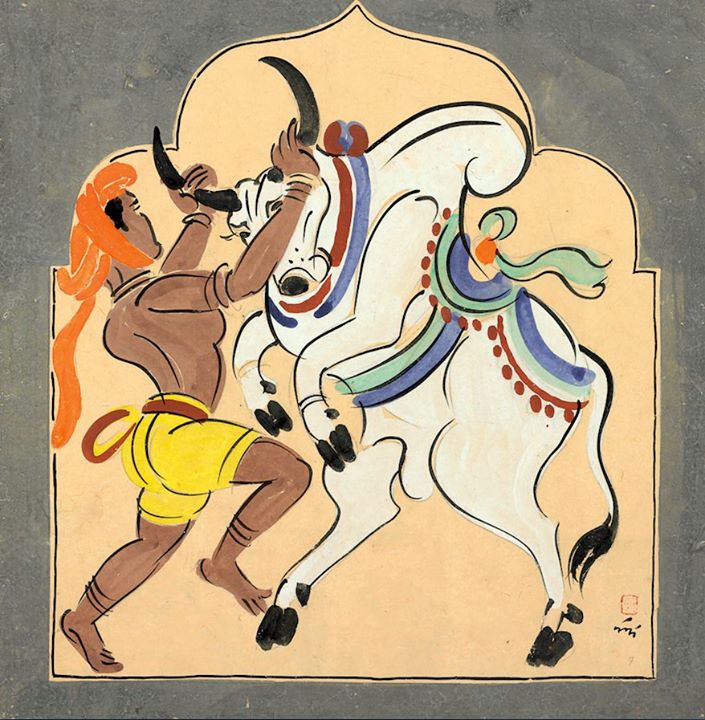 Haripura posters celebrate the Indian rural life and culture sharing a vibrant earthy color palette and bold, energetic lines with a vividly modernist graphic quality. A sweeping look at the available images reveals that these posters draw attention to the different activities, professions and trades that constellate the moments of village daily life in a picturesque continuum. Most of the imagery culled from his observed reality around were developed from the rapid sketches Nandalal did during his survey of rural areas and people living near the location. The vigorous dynamic forms of certain figures of course cut across the frame thus saving the images from monotony. Created on handmade papers stretched on straw-board, these paintings or posters were executed with brilliant colors prepared and mixed from the local earth pigments. For Gandhi, art and Nandalal were synonymous and he was proud and happy to have 'discovered' Nandalal as the artist of the Indian National Congress.

Gandhi placed Nandalal Bose in-charge of creating a unique environment infused with local art and craft, for the annual session of the Indian National Congress at Haripura, near Bardoli in Gujarat in February of 1938. As a significant component of this huge public art campaign, Nandalal planned separate paintings which were later to become famous as 'Haripura posters' depicting Indian life in all its variety. The charm and the playful gaiety exuded by the linguistic features blend perfectly well with the contents depicting subjects like Hunters, Musicians, Bull Handlers, Carpenter, Smiths, Spinner, Husking women and modest scenes of rural life including animal rearing, child-nursing and cooking. The simplicity of these works also lies in the unvarying use of the point-cusped niche that frames the principal subject.

Nandalal Bose's blackboard sketch cutouts to share art in schools are just lovely too as is his painstaking work on the chapter covers of the original Indian Constitution copy.

Yes, Nandlal Bose's work on the Indian constitution is fantastic. Reveals his deep understanding of ancient Indian iconography. His 3 volume " how to sketch" book - Rupawali , was part of the bachelors in fine art curriculum in 1960s, in various Indian universities. Lithographed 3 volume books published in 1961, packed with Nandlal Bose's sketches, are increasingly rare to find & very collectible.

Wow ...what an interesting information of art and Nandlal Bose.