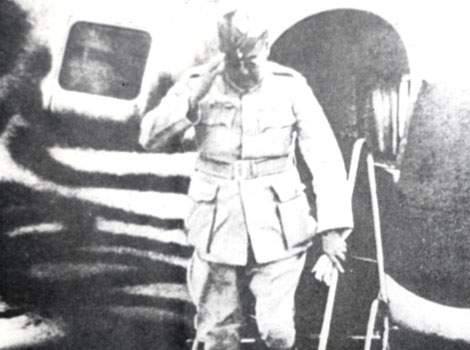 Post-Independence India's biggest intrigue-the disappearance of Subhas Chandra Bose-is as opaque today as it was 60 years ago.

A new twist was added to the mystery last fortnight by the Justice Manoj Kumar Mukherjee Commission of Inquiry which is believed to have "concluded" that Netaji did not die in an air crash in Taiwan on August 18, 1945.

The probe panel, set up on May 14, 1999 following a Kolkata High Court order in 1998 that a comprehensive search into the whereabouts of Netaji after World War II should be launched, submitted its final report to the Government on November 8, challenging Delhi's official position on the freedom fighter.

But while the Mukherjee Commission seems to have dispelled - from documentary evidence or the lack of it-one of the most popular theories on Netaji's disappearance also endorsed by a section of his family and two previous inquiry panels, it hasn't been able to answer the next question: Where did he go then?

The panel's term ended even before its original deadline of November 14 and a dispassionate Home Ministry has kept the report in its locker. An action taken report (ATR) will be filed when Justice Mukherjee's findings will be required to be tabled in Parliament, presumably under pressure from repository of Netaji's political legacy, the All-India Forward Bloc (AIFB).

Given that it was the former NDA government which executed the high court order in establishing the panel, the BJP will also be expected to ask the UPA Government for the report. But the other left parties, especially the communists, are disinclined to pursue the matter.

"Whether Netaji died or he was killed, whether he is alive or not is an issue which historians could delve into, not politicians," says CPI National Secretary D. Raja. The Government too does not sense any urgency. "The report and the ATR will be tabled in Parliament in time," says Home Secretary V.K. Duggal.

The sealed report, according to the Commissions of Inquiry Act (1952), will have to be made public within six months. So, the Congress-led ruling coalition can choose not to share the inferences till May 2006. "As soon as the winter session begins on November 23, I will ask the Centre for the report. The nation wants to know what happened to one of its tallest leaders," says AIFB General Secretary Debrabata Biswas.

Although the Government has to study the papers on Bose keeping political and historical sensitivities in mind, at this moment, the truth about Netaji's disappearance is nowhere in sight. The Mukherjee Commission's "conclusions" will, at best, trigger a fresh series of theories replacing the older ones and keep the Netaji mystery industry alive.

The Mukherjee panel's breakthrough came in January this year in Taiwan, where Justice Mukherjee found no records of any plane crash in Taipei (Japanese Taihoku) on August 18, 1945. Also, the authorities there could not provide any documentary proof of Netaji being treated by doctors of the Imperial Japanese Army after the "crash".

The lack of evidence, Justice Mukherjee found, could not substantiate the air crash hypothesis which had been accepted by the Shah Nawaz Khan Committee (in 1956) and the G.D. Khosla Commission (in 1974). Both inquiry panels believed that after Japan's surrender in World War II, Netaji, his Indian National Army (INA) colleague Habibur Rehman and 10 Japanese took off in an airplane from Tourane on August 18, 1945. The aircraft crashed in Taipei "killing" Bose and injuring Rehman. This was considered official even without the enquiry panels ever visiting Taiwan.

Why is there such fascination around this man?

Michael, He was the one torch bearer on the name of nationhood, brotherhood, Freedomhood and spirited belongingness for one's nation. it was him who torched everyone's soul of becoming patriot to shed your blood, if need be so, to unite and strengthen your Nation. The message had been applouded globally. It affirms why such fascination for this man!!