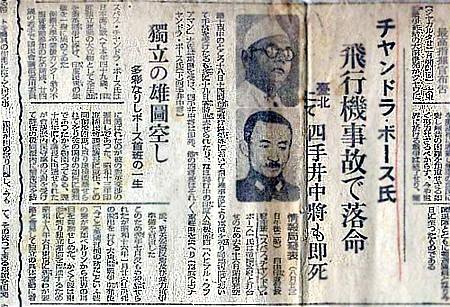 Rare Document:
REPORT of The Justice MUKHERJEE COMMISSION of Inquiry on the alleged disappearance of NETAJI Subhas Chandra Bose.

The Justice Mukherjee Commission of Inquiry into the alleged disappearance of Netaji Subhas Chandra Bose, shortened as the Mukherjee Commission, was one-man board instituted in 1999 to inquire into the controversy surrounding the death of Subhas Chandra Bose in 1945. Justice Manoj Mukherjee, a retired judge of the Supreme Court of India, was appointed to lead the inquiry. After a 7 year inquiry, Mukherjee's findings that Bose did not die in the plane crash were rejected by the government.

On 30 April 1998, the High Court of Calcutta ordered the then BJP-led Government to "launch a vigorous inquiry as a special case for the purpose of giving an end to the controversy".

Findings:
The Mukherjee Commission concluded that while Bose was presumed dead given the many years that had passed, he did not die in the plane crash in Taipei in 1945. Instead the commission proposed that the crash was a ruse to allow Bose to escape with the knowledge of the Taiwan and Japanese governments of the time. The Indian government was said to have learned of the escape through a Taiwanese report in 1956, which it chose to suppress. According to the commission the ashes kept in Tokyo's Renk?ji Temple that are commonly believed to be Bose's, instead were the remains of Ichiro Okura, a Taiwanese army-man who died in August 1945. The commission did not find any evidence that Bhagwanji, a monk who lived in Faridabad until his death in 1985, was in fact Bose in disguise.
(Wikipedia)

Image:
Clipping from Japanese newspaper, published on 23 August 1945, reporting the death of Bose and General Tsunamasa Shidei of the Japanese Kwantung Army in Japanese-occupied Manchuria.
(Wikipedia)

Thanks for sharing these documents

SC Bose never died in plane crashed. Glad that facts were discovered. He deserves to be the Father of Nation.

Tha for this treasure news

Nehru was a broadminded, cultured and highly sophisticated prime minister. The report that two recently de-classified Intelligence Bureau files reveal that former prime minister Jawaharlal Nehru spied on the family of Subhash Chandra Bose for two decades from 1948 to 1968 may be to trace the whereabouts of Bose. Although they had conflicting political ideologies, Nehru would never work for the fall of Bose. Nehru even accommodated conservative leaders such as Patel and Morarji Desai. It was Gandhi who disliked Bose and wanted to eliminate him from Indian politics. When Bose contested for Congress presidentship, Gandhi set up Pattabhi Sitaramayya to oppose him. When Sitaramayya was defeated, Gandhi exclaimed: "I consider Sitaramayya's defeat as my personal defeat." Gandhi won't allow Bose to function as president putting so many hurdles. That was one of the reasons for Bose to leave India.