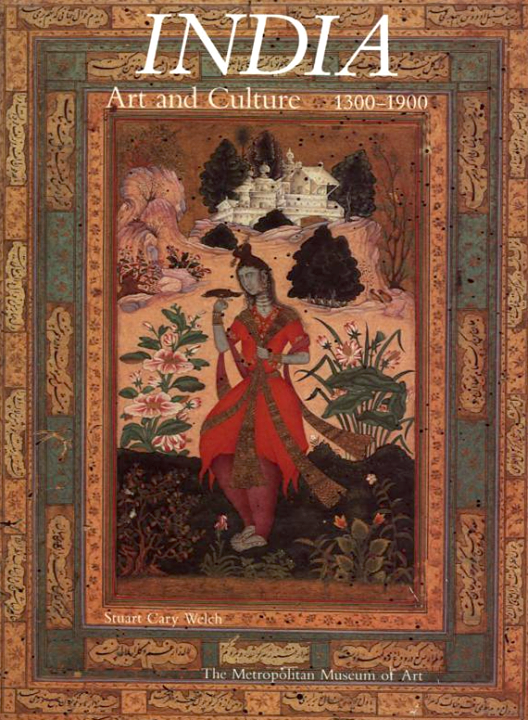 India: Art and Culture 1300–1900 is a tribute to the rich and varied culture of India as represented in the later art of the subcontinent, dating from the fourteenth through the nineteenth century. Comprehensive in its conceptual framework, this presentation of three hundred thirty-three works brings together masterpieces of the sacred and court traditions and embraces as well the urban, folk, and tribal heritage.

This volume, which is divided into five sections, opens with the bronze sculptures, ritual objects, and temple hangings of the classical Hindu tradition of the south. The vivid and lively art of rural India, which provides an aesthetic continuum that extends throughout these six centuries, is presented in the second section, Tribe and Village. This is followed by the highly refined and sophisticated art of the Muslim courts, which reached its greatest flowering in the exquisite illustrated manuscripts executed under the patronage of the Mughal emperors. In addition, the imperial ateliers of the Mughals produced works of technical brilliance in a wide array of decorative arts. Political alliances between the Mughals and the Hindu nobility in the north led to a fusion of Islamic and Hindu traditions that is explored in the bold, vigorous miniatures and dazzling weaponry of the Rajput world. And the art of the nineteenth century, produced under the Raj as Indian artists began to assimilate Western perspectives, is documented in the last section, the British Period.

Stuart Cary Welch's pioneering scholarship in the field of Indian painting and the decorative arts is well known to art historians and museum-goers. In his sensitive, informative, and highly readable text he not only discusses each work from the point of view of a connoisseur but also presents the cultural and historical milieus in which each was created.

India: Art and Culture 1300–1900 is the catalogue for the exhibition INDIA!, held at The Metropolitan Museum of Art, New York, from September 14, 1985, through January 5, 1986, the most extensive survey of Indian art ever assembled by a museum in the United States.