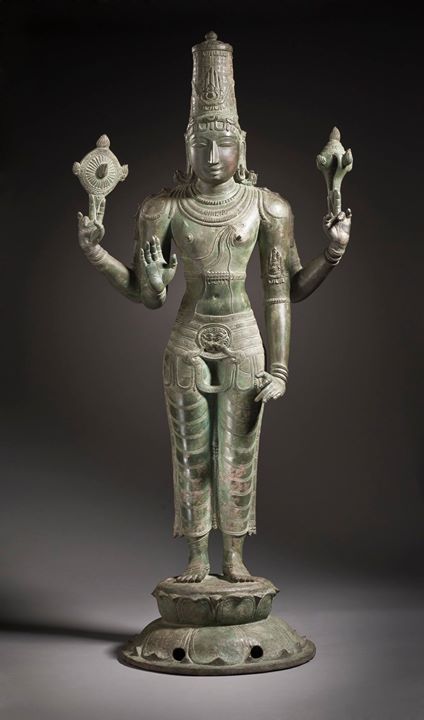 The Vishnudharmottara is a Supplement or Appendix to the Vishnupurana. Part III of the Vishnudharmottara gives the fullest account hitherto known) of the various branches, methods and ideals of Indian painting. It deals not only with its religious aspect but also, and to a far greater extent, with its secular employment. It proclaims the joy that colours and forms and the representation of things seen and imagined produce. Speaking of artistic representation in relation to religion, it points out their mutual limitations :

" Vajra said - The Supreme Deity has been described as devoid of form, smell and emotion and destitute of sound and touch so how this form can be (made) of Him ?

Markandeya replied Prakrti and Vikrti (come into existence) through the (variation in) the form of the Supreme Soul. That form of Him (which is) scarcely to be perceived is called Prakrti. The whole universe should be known as the Vikrti (i.e,., modification) of Him, when endowed with form. Worship and meditation (of the Supreme Being) are possible (only when He is) endowed with form... The best position of the (Supreme) Soul (however) is to be imagined without form. For seeing the worlds (He) possesses eyes closed in meditation..."

This concession being made, life in its entirety becomes fit for artistic representation', and the realm of imagination is as close within the reach of the artists, as nature that surrounds him, for tradition guides him in the one case and observation checks and inspires him ini the other.

The Vishnudharmottara admits in several places, that it is but repeating and compiling from older sources. These being lost to us, our text represents the earliest exhaustive account of the theory of painting. Its date can be ascertained partly from chapters being copied from earlier sources, and partly from a custom of setting up statues to renowned personages with which the text deals.

First translation of the chitrasutra from sanskrit to english, undertaken at aabindranath tagore's request. C. Sivaramamurti translation of 1960s is a much better book and offers new insights on the indian theory of art

Ratnesh Mathur: Are you referring to 'Art of India' by Calambur Sivaramamurti?

Prolific writer. More than 70 works. The one am referring to, is this one ( http://www.printsasia.com/book/chitrasutra-of-the-vishnudharmottara-c-sivaramamurti )

I thought Vishnudharmottara (I have all three volumes) deal with iconography... not painting or other art forms.