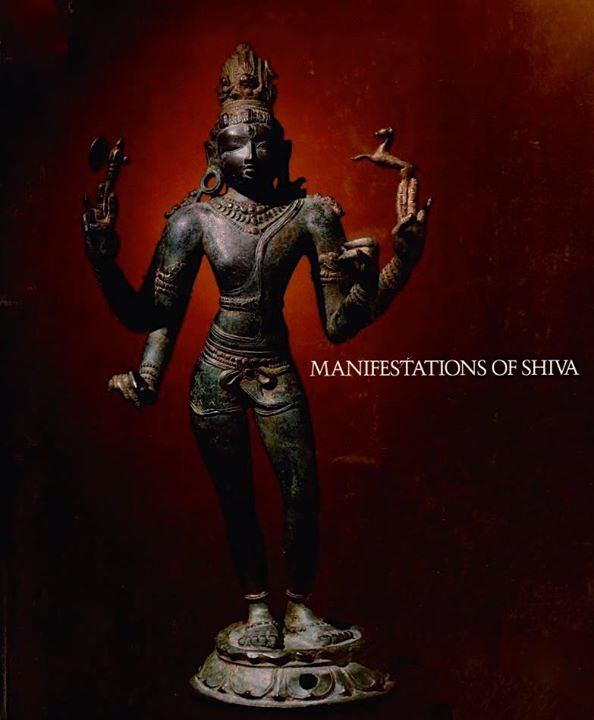 Digital Rare Book:
Manifestations of Shiva
By Stella Kramrisch
Published by The Philadelphia Museum of Art - 1981

This exhibition, "Manifestations of Shiva," is planned as a tribute to India, to its long civilization, and to its religions, by focusing upon a major Hindu god, Shiva, who as Lord of the Dance is the god of creativity. Shiva is ineffable, infinite, and eternal, but does reveal himself to man in an extraordinary variety of concrete manifestations in the sculpture and painting of over two thousand years to which the exhibition is dedicated. We hope it will bring all of us closer to understanding the religious and intellectual life of India.

The concept of the exhibition has been that of Stella Kramrisch, Curator of Indian Art at the Philadelphia Museum of Art. She has also been responsible for the realization of the exhibition in the selection of the works, their installation, and the writing of this catalogue. She has even encouraged the film maker, Malcolm Leigh, throughout the evolution of the film Manifestations of Shiva, and guided a former student, Joseph M. Dye, in his writing of a supplemental publication for the exhibition, Ways to Shiva. Her exploration of the meaning of Shiva and the development of that meaning over time has led her to an examination of sources for the myths of the god in a major volume, The Presence of Siva, which Princeton University Press is publishing in conjunction with the exhibition. The book, the exhibition, and this catalogue should be as important for their contributions to the knowledge of Indian art as the formidable list of Dr. Kramrisch'sother publications, which include her renowned study The Hindu Temple.

Thank u for sharing the link with us...

Obituary: Stella Kramrisch, Indian-Art Expert And Professor, 97 New York Times - September 2, 1993 Stella Kramrisch, an authority on Indian art, a teacher and a curator, died on Tuesday at her home in Philadelphia. She was 97 and lived near Philadelphia. Born in Mikulov, Austria, on May 29, 1896, Professor Kramrisch earned a doctorate of philosophy in Vienna in 1919. When she became the first professor of Indian art at the University of Calcutta in 1923 and published "Principles of Indian Art" in 1924, Professor Kramrisch laid the foundations for the systematic study of Indian art. She personified that systematic study in the series of books that followed: "Indian Sculpture" (1932), "A Survey of Painting in the Deccan" (1937), "Indian Terracottas" (1939), "The Hindu Temple" (1946) and "Arts and Crafts of Travancore" (1948). From 1932 to 1950 the professor co-edited the Journal of the Indian Society of Oriental Art. From 1937 to 1941 she lectured on Indian art at the Courtauld Institute in London. In 1950 she moved to the United States, where she was both professor of South Asian art at the University of Pennsylvania, and curator of Indian art at the Philadelphia Museum of Art. In 1964 she was appointed professor of Indian art at the Institute of Fine Arts at New York University. Apart from teaching and writing, she was highly regarded as an exhibition organizer. Examples of her skill were "The Art of Nepal and Tibet" (1960), "Unknown India: Ritual Art in Tribe and Village" (1968) and "Himalayan Art 700-1900" (1978), all at the Philadelphia Museum of Art. She produced a show, "Manifestations of Siva," for the Philadelphia Museum in 1981. The professor's last exhibition was "Painted Delight," a show of Mogul paintings, also at the Philadelphia, in 1986. Source: http://nyti.ms/1ynahen