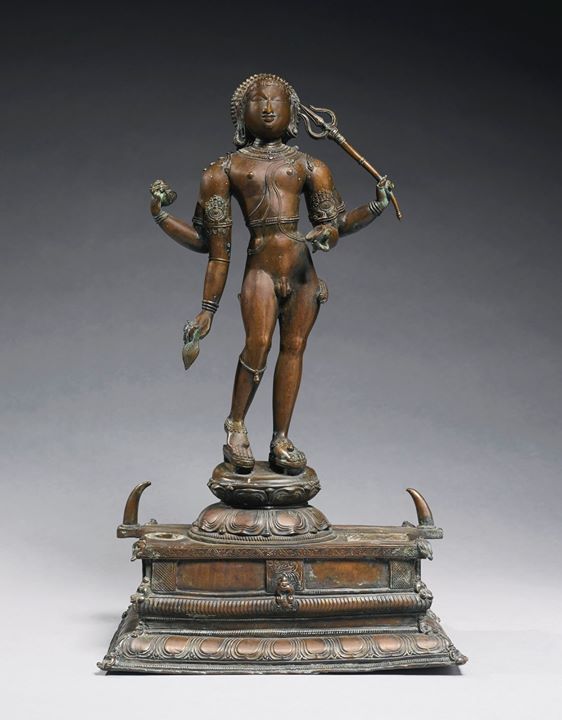 The present sculpture depicting Shiva’s manifestation as Bhikshatana, “the enchanting mendicant,” embodies the inspired modeling, sinuous elegance and spontaneous charm of late south Indian bronze casting. One senses the presence of the master bronze sculptor in the subtlety of naturalistic musculature sensitively portrayed in the gentle curves and the treatment of the smoothly modeled planes of the body. Embellishments such as the trishula and the bull horns on the base, the makara earring worn by the Lord in his right ear, the arch of his bejeweled foot and the kirttimukha in his hair are evidence of the creativity and inventiveness of the artist. Chased with extraordinary finesse, the detailing of the sculpture surpasses that of most sculptures of the period.

Represented as the wandering mendicant in mid-stride, this sculpture’s iconography relates to the punishment of Shiva who according to the Lingodbhava myth decapitated the god Brahma for refusing to admit Shiva’s supremacy. Shiva was cursed to wander the countryside as a naked beggar and accordingly is clad only in wooden sandals and a beggar’s bowl, is said to represent the head of Brahma. Wherever Shiva wandered as a beggar, women who gave him alms fell in love with the inexplicable radiance of his form. Artists and poets stressed the manner in which the garments slipped off the maidens’ bodies as they were overcome with desire for the beautiful Lord:

Listen my friend, / yesterday/ in broad daylight / I’m sure I saw / a holy one, / as he gazed at me / my garments slipped / I stood entranced / I brought him alms / but nowhere did I see / the Cunning One / If I see him again / I shall press my body / against his body / never let him go / that wanderer / who lives in Ottiyur.

Executed soon after the golden age of the Vijayanagara Empire, the present piece retains the best of this culture’s sculptural achievements which persisted into the Nayak period. With its buoyant, sensual and almost whimsical modeling, the image captures in the essence the mysterious splendor of the handsome Lord of the forests.

AMAZING... NAMASTE TO THE SCULPTURE....

Nothing could be farther from the erroneous statement "Represented as the wandering mendicant in mid-stride, this sculpture’s iconography relates to the punishment of Shiva who according to the Lingodbhava myth decapitated the god Brahma for refusing to admit Shiva’s supremacy." Yes, Shiva was condemned to become a mandicant and yes, as a penance for BRAHMA-HATYA (Brahmin murder, literally) for decapitating Brahma's 5th head, with his finger nail. The reason: Brahma was lusting after his own daughter, Saraswati, and followed her wherever she went. According to the Puranas this is why Brahma, having fallen from grace, and is not worshiped. There are only 3 Brhama Temples in India the most famous of which is the one in Pushkar, Rajasthan.