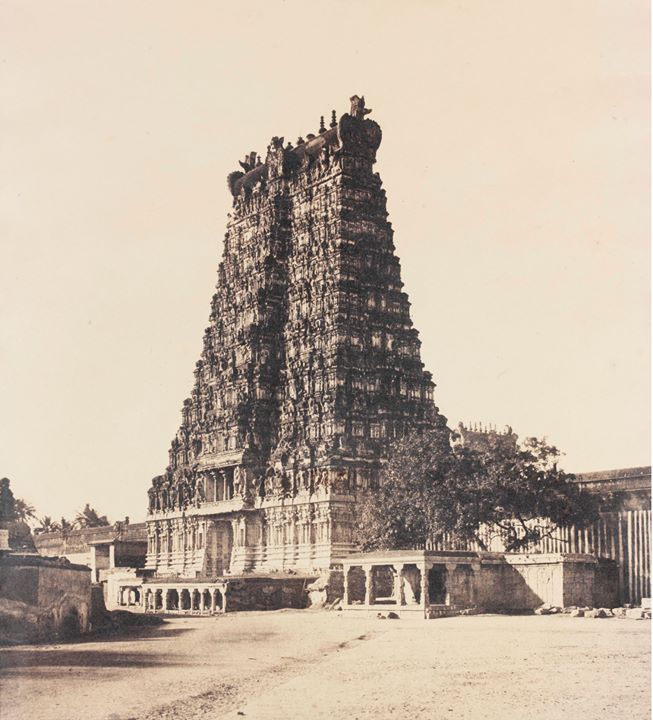 'The East Gopuram of the Great Pagoda', from the photograph album by Capt. Linnaeus Tripe, 'Photographs of Madura: Part III', South India, 1858.

Linnaeus Tripe (1822-1902) documented much of south India as official photographer to the Madras government (1856-1860). His album Photographs of Madura: Part III contains fifteen images of the Great Pagoda of Madura, a famous and celebrated piece of architecture. This image shows the East Gopuram (gateway) of the Great Pagoda and is similar to plate IX, the western gopuram.

The accompanying text tells the history of the Pagoda: '…In the days of Kalashekhara Pandyan whose Metropolis was at Manavúr, one Dhananjaya, a merchant, was benighted in the forest, or [sic; of] Kadamba trees (Nauclea cadamba) which overspread the Peninsula after the deluge, and discovered the image under a tree. He worshipped, and informed the King of what he had seen; the Monarch was commanded by the god in a vision to erect a temple in the wilderness over his image. He accordingly set about building the Pagoda which he completed; and the Town of Madura at the same time. Shortly afterwards the king had a daughter supernaturally born to him, whom Shiva afterwards made his consort, or more correctly speaking Parvati became incarnate as the daughter of Malaya Dhuraja King of Madura, son of Kalashekhara Pandyan; After the death of that King, Shiva in person ruled Madura under the name of Sundara or Sundareswara Pandyan…'

getting goose pimples reading such accounts....!