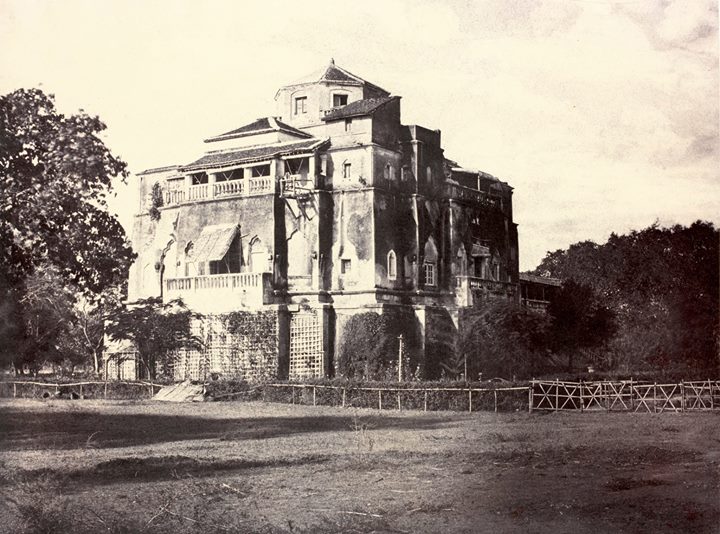 'The Tamukkam or Tamkam', from the photograph album by Capt. Linnaeus Tripe, 'Photographs of Madura: Part 1'; South India, 1858

This photograph shows a large residential building with trees surrounding it and a long lawn in the foreground.

'This is a building situated N. E. of the town of Madura. It now forms the residence of the subordinate Judge of the station. It is supposed to have been built at the same time as the [Madura] palace (Circa. A.D. 1630) for the purpose of witnessing fights between human beings and wild animals or…for a cock-pit… The distinctive features of the building have now been to a great extent lost, owning to the adaptation of the building to an European residence…'.

The Madras government appointed Tripe as photographer following the 1855 directive from the Court of Directors in London, who discouraged illustration in favour of 'photography as a means by which representations may be obtained of scenes and buildings, with the advantages of perfect accuracy, small expenditure of time, and moderate cash', and asked that photography be the main means of recording architecture and antiquities (Dewan, p.6).

As official photographer to the Madras Government, Tripe set off from Bangalore on 14 December 1857 after delays due to waiting for modifications to his new English camera, and his recovery after falling from a horse. He ended his tour in Madras on 30 April 1858 after travelling via Srirangam, Tiruchchirappalli, Madurai, then Pudukkottai, Tanjore, and Tiruchchirappalli again (then called Seeringham, Trichinopoly, Madura, Poodoocottah and Tanjore).

All of these areas had been forcefully taken under British rule in the previous one hundred years, but Tripe looked for scenes or subjects with architectural or antiquarian interest rather than political significance. He had wanted to ensure his images were practical too: before he had set out he had asked the chief engineer for guidance on what would be most useful from an engineering perspective, and incorporated this input into his work.