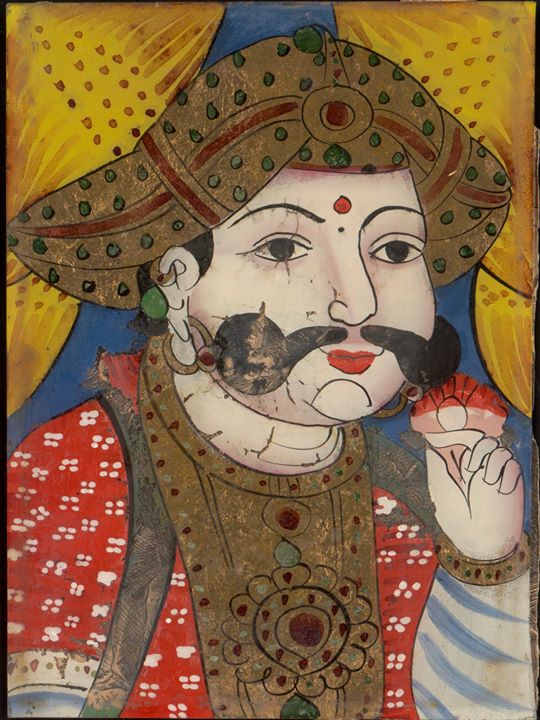 Article:
How a Maratha king held his own under British domination
By M T Saju
Times News | Feb 25, 2015

In 1801, the Maratha ruler of Thanjavur went on a two-month pilgrimage, covering more than one hundred temples situated along the Cauvery river. The king performed the ritual consecration of 108 shiva lingas in a colonnade of the 11th century Brihadeshwara temple after the pilgrimage.

As a tribute to this pilgrimage, a court poet called Siva wrote a poem in Marathi titled "Sri Maharaj Sarabhendratirthavali" (sequence of king Sarabhendra's sacred places). Unfortunately, the work didn't get the importance it deserved.

According to Indira Viswanathan Peterson, a US-based Indian academic, who has recently completed the biography of Serfoji II, the poems stand testimony to the initiatives the king undertook through his Cholanadu pilgrimage to legitimize his sovereignty as a ruler of Thanjavur under colonial domination.

"The poems in Marathi capture an important event in a Thanjavur king's career in the colonial era, tracing in its narrative a new convergence of the sacred and the political. It also testifies to the enduring power of the Cauvery and the myths of the Cholas in public memory," she said.

In 'Sharabhendratirthavali', poet Siva traces Serfoji's journeys to the sacred places of Cholanadu, travelling from Thanjavur along the banks of and criss-crossing Cauvery and other rivers up and down the coast. He weaves into this account narratives of the features of each pilgrimage and shrines, its local legends and glories, and detailed descriptions of the king's activities there.

In addition to worship of deities, Serfoji's rites at each pilgrimage included bathing and other water-rituals, including ancestral offerings, said Indira, who is professor of Asian studies at the Mount Holyoke College, US.

All the kings of Thanjavur, including the Marathas, who arrived in 1674, and the Telugu Nayaks before them, styled themselves as 'monarch of the Chola realm' and the association of the Chola region with the sacred river Cauvery is an old and persistent one. But no ruler of Thanjavur before Serfoji had undertaken a pilgrimage covering the Cholanadu heartland in its entirety.

Serfoji had important motivations for undertaking a great pilgrimage and for imbuing it with political symbolism. Serfoji's claim to the Thanjavur throne in 1787, as a young adopted son of King Tulajaji II, had been contested by Tulaja's half-brother Amar Singh, who ruled the kingdom under British colonial auspices.

"In 1798, the tide of events turned in favour of Serfoji's accession, but in 1799, the young ruler had to sign over nearly the entire Thanjavur territory to the East India Company, retaining only the fort and capital city of Thanjavur.

In 1801-02, he needed to affirm both political legitimacy and ritual sovereignty marked by 'dharmic' piety. The pilgrimage would accomplish these goals, and it also served the symbolic goal of the 'digvijaya'," Indira said.

A local artist painted this portrait of Raja Sarabhoji of Tanjore (Thanjavur) on glass around 1860. The raja is holding a flower. This is a common feature of portraits of Indian rulers. It symbolises the sitter's sensitive and cultured nature.