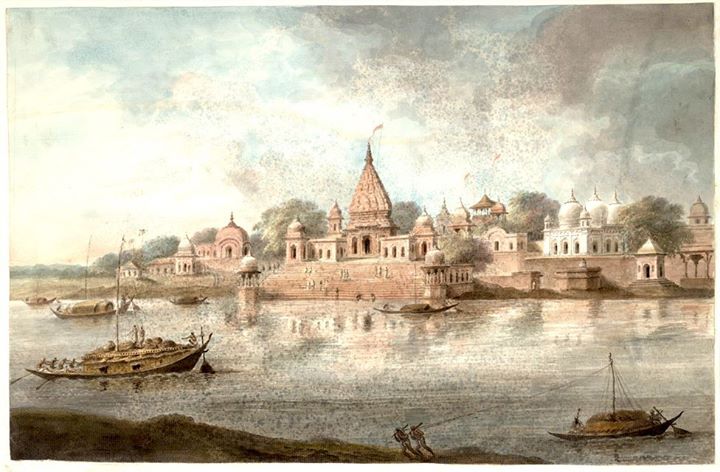 The Brahmavarta ghat with attached temple, and other buildings including a mosque, at Bithur - 1814

Watercolour of Brahmavarta ghat at Bithur from 'Views by Seeta Ram from Cawnpore to Mohumdy Vol. IV' produced for Lord Moira, afterwards the Marquess of Hastings, by Sita Ram between 1814-15. Marquess of Hastings, the Governor-General of Bengal and the Commander-in-Chief (r.1813-23), was accompanied by artist Sita Ram (flourished c.1810-22) to illustrate his journey from Calcutta to Delhi between 1814-15.

Bithur, located near Kanpur on the Ganges river, is known for the Brahmavarta ghat, at which it is believed that "Brahma celebrated the completion of the creation of the world by a horse sacrifice at this place." View of the Brahmavarta ghat with attached temple, and other buildings including a mosque. Inscribed below: 'Bithoor.- Bathing place with Hindoo Mundell, and at the Right a Musgid.'

Sita Ram's work shows that a large number of Hindu temples thrived at the turn of the 19th century even in the Hindi heartland at the commencement of British supremacy in India.

All structures were added by Nana Saheb at Bithur. It is a forgotten place by modern explorers.